In a split opinion, the Federal Circuit has affirmed summary judgment of obviousness in Intercontinenntal Great Brands (Kraft) v. Kellogg (Fed. Cir. 2017). Writing in dissent, Judge Reyna argued that the majority improperly applied a shortcut “prima facie obviousness test” without allowing for a full consideration of the patentee’s objective indicia of non-obviousness that the district court found both substantial and compelling.

The majority opinion, authored by Judge Taranto and joined by Chief Judge Prost begins with a discussion of the resealable cookie package covered by Kraft’s U.S. Patent No. 6,918,532.  Essentially, we have a wet-wipes package for cookies. 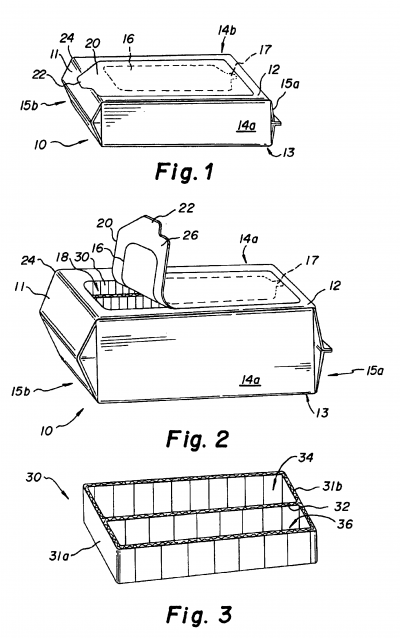 One difference from wet-wipes is that the cookies need a frame to avoid crushing.  The defendants here relied upon a prior art reference showing a rigid re-sealable sushi container (image below).  The container has a tray, and the claimed frame is essentially a tray with higher sides.  When combined with known cookie packaging frames — the district court found that “the only reasonable inference on the record was that a relevant skilled artisan would have been motivated to combine those prior-art references.”

In particular, the court noted that the difficulty with opening and closing cookies was well known, and the tray in the Machine Update prior art could simply be replaced with a more complete frame (i.e., a tray with higher sides) to protect the cookies.

In reviewing the lower court decision, the majority wrote:

[T]he court considered the simple and clear teachings of the art, the importance of common sense and ordinary creativity, and the conclusory character of Kraft’s expert’s assertions of nonobviousness.

Despite my love of cookies, I have to admit that I have never purchased one of these re-sealable containers as my preference is to complete a package within a single sitting.  However, the product packaging has apparently met with some amount of commercial success.

Regarding objective indicia of non-obviousness, the district court found it to be highly “substantial” and “compelling” with great commercial success tied to the packaging, industry praise, and copying by the defendant here.  On balance, however, the district court found (on summary judgment) the evidence was insufficient to raise a jury question.

Quite simply, according to the district court, there are some prima facie obviousness cases so strong that they are impossible to overcome even with the best possible secondary indicia of nonobviousness.   On appeal, the majority affirmed this reasoning with a quote from the Supreme Court’s KSR analysis:

Where, as here, the content of the prior art, the scope of the patent claim, and the level of ordinary skill in the art are not in material dispute, and the obviousness of the claim is apparent in light of these factors, summary judgment is appropriate.

To be fair, the majority is clear that the ultimate conclusion of obviousness still requires consideration of the objective indicia (even if they could not make a difference).  However, the majority finds that conclusions regarding the evidence – such as a motivation to combine references — may be drawn without consideration of the objective indicia.

I would find that the district court improperly found a prima facie case of obviousness before considering Kraft’s evidence of objective indicia of nonobviousness. . . . I am left to wonder how “substantial” and “compelling” evidence of objective indicia cannot overcome a prima facie showing. If such significant evidence does not make a difference in this case, it is hard to imagine a situation in which it would.

For many, the problem with Reyna’s dissent is quite simply that it will make summary judgment more difficult — and the conventional wisdom is that winning an obviousness case is extremely difficult before a jury.

The majority-dissent also battle over the ‘correct’ order of consideration of the questions of operation. I’ll save that issue for a separate post.