After reading their recent article, I asked Cesare Righi and Timothy Simcoe to write this explanatory guest-post for Patently-O.  My basic take-away is that USPTO Tech-Centers differ substantially in their internal levels of tech-homogeneity — making the classification system useful for Chemistry, but not really useful for Computer-related combination inventions.  –Dennis

A growing body of research shows that individual examiners at the USPTO produce systematically different outcomes along important dimensions such as the grant rate, claim narrowing and time to dispose an application.[1] This creates a difficult trade-off for the USPTO. One approach to “fairness” would be to give each application, and therefore each applicant, the same chance of getting a particular examiner. On the other hand, the quality and efficiency of the examination process are likely to benefit when examiners specialize in particular areas.

In a new working paper, we measure technological specialization by patent examiners within different art-units at the USPTO, and study the impacts of specialization on the examination process. Our research was partly motivated by several recent studies that assume applications are randomly assigned to examiners (within art-unit-years) in order to estimate the causal impact of granting a patent. We show that a core premise behind the statistical approach used in those papers is wrong.

We find significant heterogeneity across technology centers in terms of specialization, and show that more specialized examiners are also “tougher”. The data for our analysis come from all published original utility patent applications filed between November 29, 2000 (enactment of the American Inventor’s Protection Act of 1999) and the end of year 2012. Our main results are illustrated in the figure below.

The blue bars show how often we can reject the hypothesis that the primary USPC subclass of applications filed in a given year and examined by a given art unit are randomly allocated across examiners within the given technology center. This measure of specialization reveals far more clustering by technology in the Life Sciences and Chemistry areas, than in Computers and Communications. For technology centers 2100 and 2400, the random matching assumption appears plausible. One explanation of the pattern in Figure 1 is that computer examiners are generalists, at least relative to the rest of the examiner corps. An alternative story is that the USPC classification does a better job of measuring real technical distinctions outside of the computing technology centers. 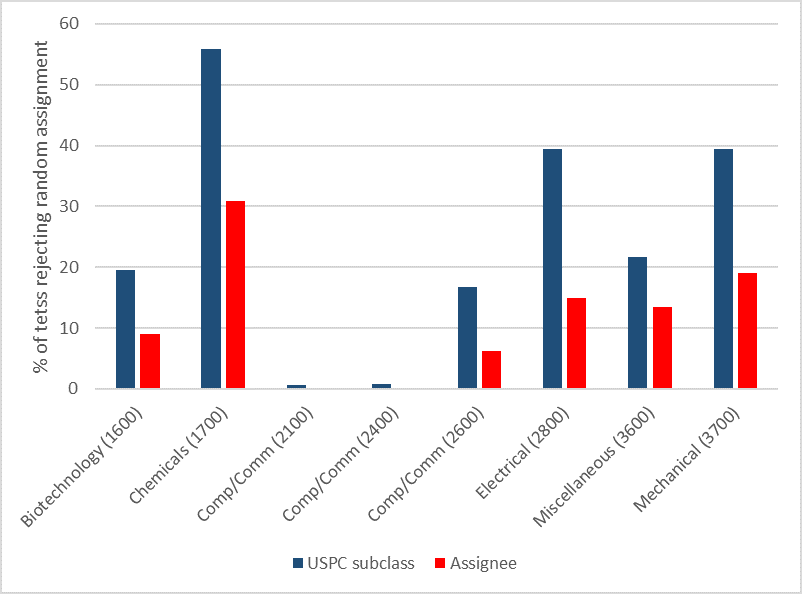 For each technology center, the graph reports the percentage of Multinomial Tests of Agglomeration and Dispersion (MTAD) that reject the null hypothesis of random allocation within art-unit-year of applications to examiners in favor of agglomeration at the 1% significance level. Please see the paper for details on these tests.

The red bars in Figure 1 show a similar pattern of specialization for individual assignees – applicants are not randomly distributed across examiners, particularly in the Chemistry area. This pattern may be driven by technical specialization. When we examine assignee agglomeration within technological subclasses, the evidence of examiner specialization becomes weaker, although we still find some within the Chemistry and Biotechnology tech centers. Reassuringly, our analysis found no evidence that some examiners handle more applications that are particularly important (with large “families”) or broad (having a short first independent claim). To study how examiner specialization is related to examination outcomes, we created a measure based on the share of applications (in a particular year) having the same primary USPC subclass. The table below shows that as examiners’ workload is increasingly concentrated within a few subclasses, they have a lower allowance rate and produce larger increases in the length of the first claim (although the latter effect is not large). More specialized examiners also take slightly longer to process the application. The natural interpretation of these findings is that specialized examiners can more easily identify relevant prior art.

The table reports the coefficients and the standard errors (in parentheses) of ordinary least square regressions on a sample of observations at the art-unit-year-examiner level. For each application “share apps in same subclass” is the share of other applications examined by the same examiner within the same art-unit-year that have the same subclass of the focal application. To produce these estimates, we standardize “share apps in same subclass”, as well as “words added to 1st ind. claim” and “days from docketing to disposal”, and average all variables at the art-unit-year-examiner level. Please see the paper for details on sample and analysis.

To summarize, we find a significant degree of technological specialization among patent examiners working in the same art-unit. This specialization is less pronounced in some of the computer-related technology centers. We found no evidence that examiners specialize in handling important or controversial applications. And it seems that specialization is associated with a more stringent examination process, perhaps because it allows examiners to more easily identify relevant prior art.

In closing, we note that all of our research is enabled by the increased transparency and data availability made possible through the efforts of the Office of the Chief Economist of the USPTO. We thank them and hope these efforts will lead to more research on the production and the impact of patents.

The paper shortly described in this post is available on the websites of the Social Science Research Network and the National Bureau of Economic Research.

About Timothy Simcoe: Timothy is an Associate Professor of Strategy & Innovation at Boston University, Questrom School of Business, and a Research Associate with the Productivity, Innovation, and Entrepreneurship Program of the National Bureau of Economic Research.