Construing Claims: In a 2011 decision, the Federal Circuit construed the claims of Knowles Electronics’ U.S. Patent No. 6,781,231, including the claim term “package” as used in the claimed microelectromechanical system to mean a “self-contained unit that has two levels of connection, to the device and to a circuit (or other system).” MEMS Tech. v. Int’l Trade Comm’n, 447 F. App’x 142 (Fed. Cir. 2011). When passing judgment on the same patent five years later, the PTAB offered a slightly different construction during an inter partes reexamination. In Judge Newman’s view, that difference allowed for the PTAB to find the claims anticipated while the 2011 Federal Circuit decision found the patents valid. She writes:

The problem, for Judge Newman, is that a decision from the PTAB’s controlling court should control the actions of the PTAB and limit its power. For its part, the PTAB generally refuses to be bound by prior claim construction decisions by District Courts, but this is the first case where the PTAB has disregarded a prior interpretation by the Federal Circuit.

Although I began with Judge Newman’s opinion. Her opinion was in dissent, the Majority (Judges Wallach and Chen) avoided the question of whether the PTAB’s must follow Federal Circuit claim construction decisions. Rather, the majority held that the PTAB construction is in “accord with the definitions adopted in Mems Tech.” Based upon this claim construction, the majority agreed that the claims were anticipated by the proffered prior art.

Written Description: The patentee also added several claims during the reexamination. However, those were rejected for lack of written description. On appeal here, the Federal Circuit affirmed – holding that the newly added limitation that “solder pads are ‘configured to mechanically attach … the package to a surface of an external printed circuit board using a solder reflow process'” was not supported by the original specification. In particular, the specification did not identify the “solder reflow process” as the connection mechanism. Here, the PTAB held that such a process was not so well known in the art that the disclosure shows possession of that process. This factual conclusion by the PTAB was easy to defend on appeal since it need only be supported by substantial evidence. Judge Newman did not offer any dissenting opinion on this aspect of the judgment. 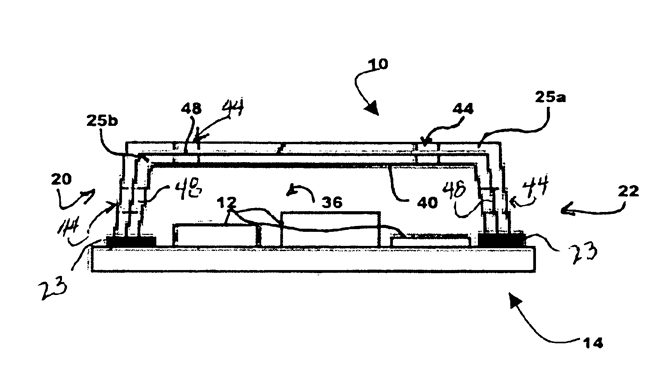