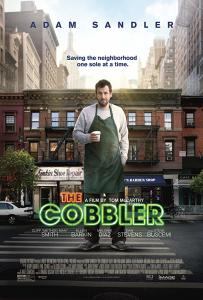 This copyright lawsuit involves cute Adam Sandler movie titled The Cobbler.  In the movie, Sandler’s character free-rides off of the experiences of others by using a magical shoe-cobbling machine.  The movie copyright holders did not reciprocate that freedom when American Pirates began downloading and distributing the movie through BitTorrent.

Cobbler-Nevada was able to trace the Internet Protocol (IP) address associated with the infringing activity and then filed suit in a John Doe lawsuit.  Comcast responded to a subpoena in the case with information that the IP address was assigned to its customer Thomas Gonzales.   The Copyright holder then amended its complaint to name Gonzales — accusing him of copyright infringement as well as contributory copyright infringement (for failing to secure his internet connection).  Note here that Gonzales operates an adult care home and that the internet service was open to residents and visitors.

The appeal here focuses on the pleadings and whether the complaint states a claim.  In Iqbal, the Supreme Court explained that a complaint must be plausible — allegation of plausible facts that create a plausible “entitlement to relief.”  Reviewing the allegations here, the 9th Circuit found that the facts alleged against Gonzalez here are “not enough to raise a right to relief above a speculative level.” (quoting Twombly).

[S]imply establishing an [internet] account does not mean the subscriber is even accessing the internet, and multiple devices can access the internet under the same IP address. Identifying an infringer becomes even more difficult in instances like this one, where numerous people live in and visit a facility that uses the same internet service. While we recognize this obstacle to naming the correct defendant, this complication does not change the plaintiff’s burden to plead factual allegations that create a reasonable inference that the defendant is the infringer.

The only connection between Gonzales and the infringement was that he was the registered internet subscriber and that he was sent infringement notices. To establish a claim of copyright infringement, Cobbler Nevada “must show that [it] owns the copyright and that the defendant himself violated one or more of the plaintiff’s exclusive rights under the Copyright Act.” Ellison v. Robertson, 357 F.3d 1072 (9th Cir. 2004). Cobbler Nevada has not done so.

Cobbler Nevada’s contributory infringement claim is premised on a bare allegation that Gonzales failed to police his internet service. This perfunctory allegation, without more, does not sufficiently link Gonzales to the alleged infringement.

Here, in particular, the complaint lacked allegations of any specific acts of active-infringement-encouragement.  As the Supreme Court explained in Grokster, contributory infringement must be based upon more than merely “failure to take affirmative steps to prevent infringement.”

The appellate court also affirmed the award of attorney fees to Gonzales.