In its decision here, a divided Federal Circuit created a new test for secondary meaning, placed limits on trade dress infringement with an analogy to design patent law, and more . . . 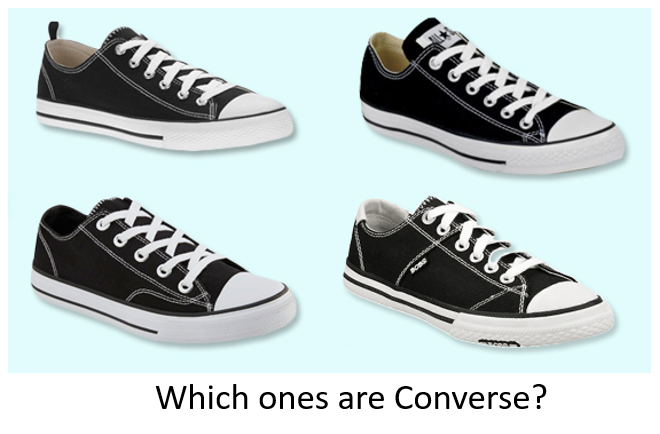 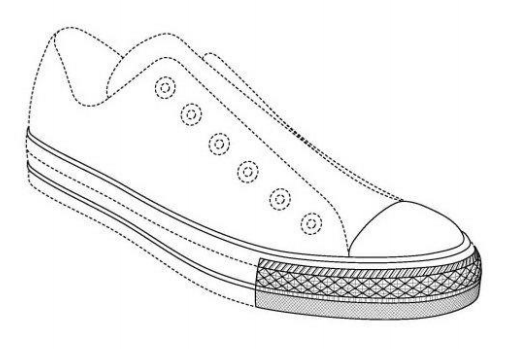 The ITC found that the mid-sole portion of these Converse All Star shoes was not a protected trademark — invalidating the Chuck Taylor trade dress registration (Reg. No. 4,398,753) and rejecting the existence of common-law rights.  Although it found no trademark rights — the ITC did explain that the accused shoes would be infringing if the mark was valid.  On appeal, the Federal Circuit has vacated and remanded.

Distinctiveness is a threshold requirement for trademark rights.  In Wal-Mart Stores, Inc. v. Samara Bros., Inc., 529 U.S. 205 (2000), the Supreme Court held that a product design (such as a shoe portion) is never inherently distinctive, but that distinctiveness may be acquired and proven with “a showing of secondary meaning” — i.e., that the relevant consumers associate the particular product features with a particular source of goods. Thus, a trade dress rights are established over time as consumers become more familiar with the product design.

In this case, the dates are important — because “the party asserting trade-dress protection must establish that its mark had acquired secondary meaning before the first infringing use” on an infringer-by-infringer basis.  In the opinion, the court modified this “first infringing use” language to set rough five-year cutoff — applying Section 2(f) of the Lanham act to the Courts.  Thus, five years of exclusive and continuous use will can create a presumption of secondary meaning. Thus, in evaluating the “length, degree, and exclusivity of use” by the mark holder, “the ITC should rely principally on uses within the last five years. . . . [U]ses older than five years should only be considered relevant if there is evidence that such uses were likely to have impacted consumers’ perceptions of the mark as of the relevant date”

In this case, the 2013 mark registration by Converse creates a presumption of secondary meaning — as of the registration date.

Because the ITC did not establish when (if ever) the mark established secondary meaning pre-registration, on remand, Converse will be given a chance to prove that secondary meaning was established prior to “the first infringing use by each respondent.” The dissenting opinion in this case filed by Judge O’Malley would not have given Converse the opportunity to go back and provide this new evidence.

Test for Secondary Meaning: In addition to the presumption and timing issues, the Federal Circuit also found that the ITC erred in its analysis of secondary meaning — here the court laid out its particular test:

Today we clarify that the considerations to be assessed in determining whether a mark has acquired secondary meaning can be described by the following six factors: (1) association of the trade dress with a particular source by actual purchasers (typically measured by customer surveys); (2) length, degree, and exclusivity of use; (3) amount and manner of advertising; (4) amount of sales and number of customers; (5) intentional copying; and (6) unsolicited media coverage of the product embodying the mark. . . . All six factors are to be weighed together in determining the existence of secondary meaning.

This test is similar to that adopted by the various circuits, but include some quirks. (Prepare an additional post on this).

Regarding “exclusivity,” the Federal Circuit suggested that the ITC had relied upon shoes with designs “that were not substantially similar.” 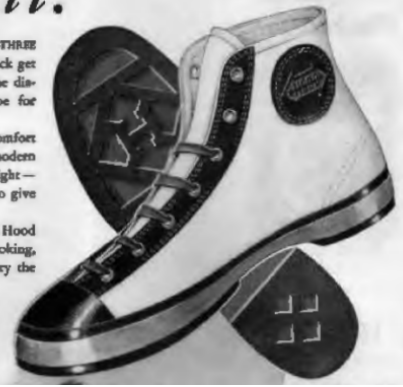 The court explained that

Although we agree with the ITC that evidence of the use of similar but not identical trade dress may inform the secondary-meaning analysis, we think such uses must be substantially similar to the asserted mark. Here, the ITC made no determination as to which of the prior uses were substantially similar.

Establishing infringement: On the infringement side, the Federal Circuit also found errors in the ITC’s likelihood of confusion test.  Here, the court held that product design trade dress can only infringe if it is “substantially similar” to the protected trade dress — noting that “We have applied an analogous requirement in the design-patent context, where infringement cannot be found unless an ordinary observer would perceive that the ‘two designs are substantially the same.'” Quoting Egyptian Goddess, Inc. v. Swisa, Inc., 543 F.3d 665, 670 (Fed. Cir. 2008) (en banc) (quoting Gorham Co. v. White, 81 U.S. 511, 528 (1871)).

Defaulting Parties: Finally, the ITC had refused to enter an exclusion order against defaulted respondents — based upon its finding that the trademark was invalid. In the appeal, the court here suggested that result should be changed.

The majority opinion was written by Judge Dyk and joined by Judge Huges.  Judge O’Malley wrote in dissent. She explained:

I agree with the majority that the International Trade Commission (“ITC” or “Commission”) erred in its legal analysis in this matter and that its decision must be vacated. I also agree that a remand is appropriate. I even agree with many of the ways in which the majority finds that the ITC erred. I cannot join in the majority’s reasoning, however, because I believe that the majority overlooks important procedural facts and binding statutory authority to reach issues that are not properly before us. Thus, I do not agree with the majority’s decision to remand questions regarding the validity of the registered mark for further consideration or its decision to even address questions of infringement. And, I cannot accede to the majority’s failure to order the ITC to enter a remedy against the parties found in default in the proceedings below or to explain why public interest concerns would justify not doing so.

Specifically, I believe that the majority: (1) misperceives the scope of the ITC’s authority to invalidate duly issued intellectual property rights when it addresses the issue of the validity of a registered mark; (2) blurs the line between the concepts of priority of use under common law and the validity of a registered mark; (3) espouses advisory—and unnecessary—opinions on the weight to be given certain survey evidence and the question of infringement; and (4) ignores the ITC’s statutory obligation to enter remedies against defaulting parties. Thus, except where otherwise noted, I concur only in the conclusion that the ITC’s findings must be vacated, and the matter remanded to the ITC for further analysis. I dissent from the fact that the majority discusses matters not properly before us and from the nature of the remand the majority outlines.