Stephen Yelderman is a Professor of Law at the University of Notre Dame Law School.

This week we’ll take a closer look at “activity” prior art—prior uses, sales, and “invention by another.” As I mentioned in my last post, a little more than half the time district courts find a claim anticipated, they rely on art in this category. Activity prior art is less common for obviousness invalidations, but still quite routine: just over a quarter of obviousness invalidations cite activity prior art. (For more background on this project, you can find the full paper here.)

The 2011 America Invents Act (“AIA”) changed the rules for determining when activity qualifies as prior art in several respects. At a minimum, the AIA constricted this category of prior art by removing the “prior invention by another” path previously found in § 102(g). Arguably, the AIA trimmed the category in another way too—by imposing a new “available to the public” requirement on prior uses and sales. (Whether it did or not is the question the Supreme Court will take up next week in Helsinn Healthcare v. Teva Pharmaceuticals.) In the opposite direction, the AIA eliminated the limitation that uses and sales qualify as prior art only if they occurred in United States. Given all this, one might wonder: just how significant are the AIA’s changes when it comes to the prior art district courts actually rely on?

All of the district court invalidations in our study (except for one) involved applications of pre-AIA law, so we can use our data to predict how many cases might come out differently if the stricter aspects of the new prior art rules had applied instead. The answer is not many. For prior invention by another, this exercise was straightforward: under pre-AIA law it was its own legally distinct category, and there is no question that it was eliminated by the AIA. Based on our coding, we found that prior invention by another constituted about 8% of anticipation events relying on activity, and was a basis for roughly 1% of obviousness invalidations citing any activity. From the perspective of anticipation and obviousness overall, just a little more than 2% of district court invalidations relied on this prior art path. (And we can’t rule out the possibility that some of that art might have qualified by a different path anyway.)

The effect of requiring prior uses and sales to be “available to the public” is slightly harder to predict, since we do not yet know what that language will mean (or, until Helsinn is decided, if it applies to prior uses and sales at all). To get a bit of purchase on this question, we coded prior uses and sales that were potentially kept secret from the public: offers / sales made to an identified counterparty (fact patterns like Pfaff v. Wells), internal commercial uses (fact patterns like Metallizing Engineering), and uses by a limited and identified group of outsiders (fact patterns like Egbert v. Lippmann). It’s important to note that this classification scheme is likely overbroad: from the documents before us, we could not always determine whether a use or sale was in fact secret at the time. Instead, we categorized activity based on whether the use or sale could have potentially been secret.

So if the past is a guide, it appears that few of the cases litigated to a decision of invalidity under the old law would be flipped under the AIA’s (purported) constriction of the activity prior art category. We must hedge a bit here, however, since we cannot say what the post-Helsinn law will be, or how inventors and litigants might adapt their behavior in light of new rules. What we can say with certainty is that, among the set of all recent court decisions invalidating patents under pre-AIA law, we find only a small number (an average of 3-4 patent invalidations a year) that would be affected by the question in Helsinn.

Unfortunately, the nature of our study does not allow us to predict the effects of the AIA’s amendments in the opposite direction—that is, the changes that made it easier for some activities to qualify as prior art. As mentioned above, the AIA eliminated the longstanding rule that uses and sales may qualify as prior art only if they were conducted in the United States. Because we were observing cases litigated under pre-AIA law, all of the activities we coded had occurred within the United States. We therefore did not observe the non-U.S. activity prior art that may have been waiting in the wings but was excluded by the pre-AIA’s domestic limitation on this category. Likewise, we cannot predict what the effect of adding “otherwise available to the public” as a distinct prior art category might be (not to be confused with the Helsinn question of whether that language modifies other categories).

Surprisingly, however, this is not what we found: 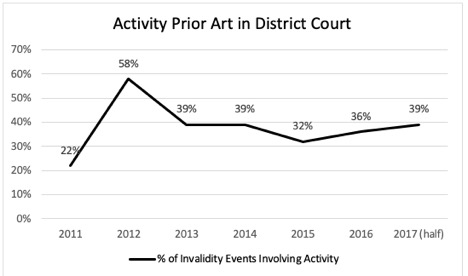 This chart illustrates the percentage of district court patent invalidations relying on activity prior art to invalidate any claim. As this chart shows, this number has remained remarkably stable throughout the advent of IPR. Though defendants may be opting in to IPR in large numbers, it is not the case that only activity-based invalidations remain in district court.

To be clear, the availability of IPR could still be having an effect on the kinds of cases that remain for validity decisions in district court. For example, courts may now be deciding only validity challenges in which the defendant made a strategic decision not to petition for IPR, or did petition for IPR without success. Moreover, during the time period illustrated above, the patent system was undergoing a number of changes simultaneously, so it is difficult to isolate the effects of IPR.

All of this is to say that the relationship between IPR and the work of district courts defies a simple explanation. But we can say with confidence that prior art patents and printed publications continue to play an important role in district court invalidations, notwithstanding the availability of IPR.

Edited 11/30: Clarified that 2% reliance on “prior invention by another” and 4-5% reliance on potentially secret uses and sales are stated percentages of claim invalidations for anticipation or obviousness. As a share of invalidations on any grounds, these numbers would be even smaller.

17 thoughts on “Guest post from Prof. Yelderman: How Much Did the AIA Change Prior Art in the District Court?”