Spineology owns U.S. Reissue Patent No. RE42,757 — covering a surgical tool known as an “expandable reamer.” In 2015 Spineology sued Wright Medical for infringement — accusing its X-REAM product. Basically, these are used to hollow-out marrow from inside the femur head. Below, I have included images from the asserted patent as well as the accused product.  The similarity is striking and there is some evidence suggesting that Wright Medical copied core aspects of Spineology’s approach. The problem for the patentee though, is that Wright Medical’s approach was not actually encompassed by the patented claims. 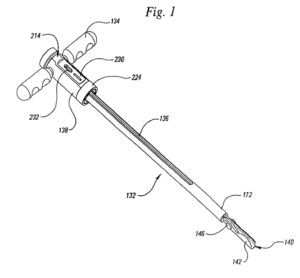 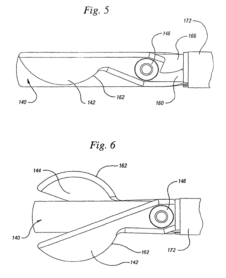 The patented claims all require an elongated hollow “body” that contains particular mechanisms.  However, the “body” term was added to the claims after filing — i.e,. the specification does not use the term “body.”  In a prior appeal, the Federal Circuit affirmed that “body” included both the shaft and the barrel near the handle.  Under that construction, the patentee admitted that X-REAM would not infringe.

After successfully defending its lawsuit, Wright then asked to be compensated for its expenditures on the case — i.e., attorney fees under 35 U.S.C. 285.

Standard U.S. practice is that each side pays its own attorneys and experts. Thus, a successful defendant may still walk away owing more than a million dollars in legal fees. Here, Wright Medical argues that it has spent more than $1.4 million to defend the case simply to win on a claim construction summary judgment.

Under Section 285, “the court in exceptional cases may award reasonable attorney fees to the prevailing party.”  Here, however, the district court declined to find an exceptional case.  On appeal, the Federal Circuit has issued a deferential ruling — holding that “the district court did not abuse its discretion in denying Wright’s motion for attorney fees under section 285.”

In the briefing, Wright argued that Spineology’s “belief that a product has been copied is not legal justification for filing a frivolous patent infringement case.”  In its opinion, the Federal Circuit did not address the copying-belief aspect — but instead focused on the conclusion that the case was not frivolous or even exceptional.

A portion of Wright Medical’s expenses were in preparing to counter against Spineology’s lost profits damages theories.  The district court never determined whether those theories held water since the case was dismissed at this early stage. Still, Wright Medical argued that the wild damages claims should make the case exceptional.

On appeal, the Federal Circuit refused to enter into a case-within-a-case analysis to determine whether the proffered damages theory was problematic.

Wright asks this court to basically decide the damages issues mooted by summary judgment in order to determine whether it ought to obtain attorney fees for the entire litigation. This we will not do. We will not force the district court, on a motion for attorney fees, to conduct the trial it never had by requiring it to evaluate Mr. Nantell’s “but for” calculations or royalty rates, and we—an appellate court—will certainly not conduct that trial in the first instance.

Although it did not say so explicitly, the Federal Circuit appears to suggest that the frivolous arguments in this case are found within the appeal itself. The court concluded its decision by awarding costs to Spineology and issuing a “reminder” to the appellant that fee awards are not to be used ‘as a penalty for failure to win a patent infringement suit.’” Quoting Checkpoint Sys., Inc. v. All-Tag Sec. S.A., 858 F.3d 1371 (Fed. Cir. 2017).

10 thoughts on “Avoiding the Weeds in Fee Shifting Cases”