Guldenaar is is seeking to patent his method of playing a dice game using specially marked dice.  U.S. App. No.  13/078,196.  The PTAB denied his patent on eligibility grounds and the Federal Circuit has now affirmed — holding that the method of game play is an abstract idea and the special markings on the dice represent unpatentable printed matter.  The decision here falls in line with In re Smith, 815 F.3d 816 (Fed. Cir. 2016) where the court held that the claimed method of playing and wagering-on a card game was an abstract idea. The patented method in Smith used a standard deck of cards, and the Federal Circuit noted that “shuffling and dealing a standard deck of cards are “purely conventional” activities. Citing Alice. 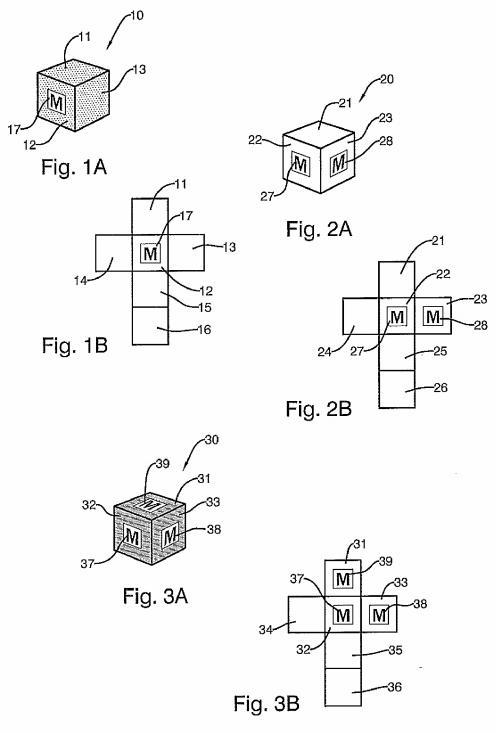 Guldenaar’s claim 1 is directed to a “method of playing a dice game” that begins with the provision of a set of three dice — each die having either one, two, or three identical marks. (See the figures above).  Someone then bets on whether or not the marks will appear face-up on the next role, and, after the roll, the bet is settled.  Pretty simple game. (Claim text below).

In applying Alice Step 1, the court found that the claims here are directed to the “rules for playing a dice game,” which is an abstract idea.  In the process, the court warned the PTO that its generalized approach to labeling “methods of organizing human activities” as abstract ideas, but found that this particular method fit the bill.

Under Alice Step 2, claims directed to an abstract idea can be patentable if the claims also include an “inventive concept” sufficient to transform the claimed abstract idea into a patent-eligible application.”  Here, one particular inventive concept appears to be the claimed set of dice that is arguably inventive, and at least not purely conventional.  On appeal, however, the Federal Circuit ruled that the die markings “constitute printed matter [that] fall outside the scope of § 101.”

Judge Chen authored the majority opinion that was joined by Judge Bryson.  Judge Mayer filed a concurring opinion channeling Justice Stevens concurring opinion in Bilski.  In Bilski, Justice Stevens (joined by Justices Ginsburg, Breyer, and Sotomayor) argued for a categorical exclusion of business method patents. Here, Judge Mayer argues for a categorical exclusion to the patenting of games — “claims directed to dice, card, and board games can never meet the section 101 threshold because they endeavor to influence human behavior rather than effect technological change.”

1. A method of playing a dice game comprising:

rolling the set of dice; and

paying a payout amount if the at least one wager occurs.