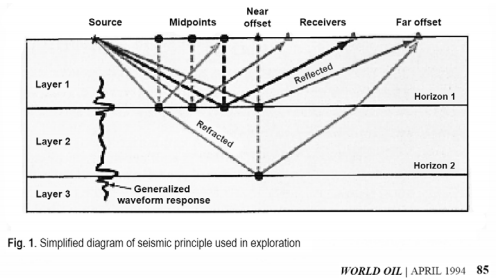 In 2018, WesternGeco seemingly won its international-patent-damages case against ION — with the court agreeing that lost-profit damages are available even for extra-territorial sales.  After winning its $100 million trial against ION, WesternGeco sued another competitor, Petroleum Geo-Services (PGS), for infringement.  PGS then challenged the asserted patents in an Inter Partes Review (IPR) proceeding that resulted in all of the claims being cancelled as obvious or anticipated.

35 U.S.C. §315(b) bars the Patent Office Director from instituting an IPR proceeding on a petition “filed more than 1 year after the date on which the petitioner, real party in interest, or privy of the petitioner is served with a complaint alleging infringement of the patent.”  By the end of its infringement trial, ION was time-barred — however, PTO still allowed ION to join PGS’s case once instituted – but gave it “spectator status.” Still, ION (but not PGS) defended the Board’s decision on appeal.

The Federal Circuit affirmed the Board decision, finding that unpatentability findings supported by substantial evidence, and that the Section 315(b) time-bar didn’t apply since ION did not have any direct or indirect control PGS’s IPR filings and PGS had a separate legitimate reason to file the IPR other than protecting ION.

WesternGeco presented evidence that the two companies worked together to launch the infringing product, and that their agreement included an indemnity agreement — with ION making a “product assurance pledge” for products delivered by PGS.  The Federal Circuit, however, disregarded the evidence as insufficient to create the specific privity needed to trigger the Section 315(b) time-bar.

Now, WesternGeco is back before the Supreme Court asking for review on the real-party-in-interest question. Here is how WesternGeco frames the question:

ION worked closely for years with another company, PGS, as its “launch partner,” to develop a product found to willfully infringe WesternGeco’s patents. ION and PGS shared an indemnity relationship, with ION making a “product assurance pledge” regarding the accused product and the asserted patents. After ION lost at trial and was concededly time barred from pursuing IPRs, PGS filed petitions (which ION later joined), resulting in the invalidation of many of WesternGeco’s patents. The Patent Office not only denied WesternGeco discovery into details of the PGS-ION relationship, it prohibited WesternGeco from even filing a motion for such discovery because WesternGeco did not already have evidence that ION “controlled” these IPRs. The Federal Circuit applied a “control” test in affirming.

1. Whether the court of appeals and agency erred by holding that “real party in interest, or privy of the petitioner” refers only to others who “control” the petitioner’s litigation before the agency.

2. Whether the Patent Office. may deny discovery—or even leave to file a discovery motion—designed to meaningfully test whether that statutory prohibition applies, and then invalidate a patent.

I see this as a good case for the Supreme Court to take and hear – especially since the court is already familiar with the patents and parties in question.  I find it interesting how the Federal Circuit identified the indemnification provision as “fairly standard” and not specific enough to trigger the real-party-in-interest or privity clauses of 315(b).

One issue of importance in this area is the implied Warranty Against Infringement found in Article 2 of the Uniform Commercial Code.

Unless otherwise agreed a seller who is a merchant regularly dealing in goods of the kind warrants that the goods shall be delivered free of the rightful claim of any third person by way of infringement or the like but a buyer who furnishes specifications to the seller must hold the seller harmless against any such claim which arises out of compliance with the specifications.

UCC 2-312(3).  Although the UCC does not apply to WesternGeco’s case, it likely applies in many others as a potential way to show sufficient privity to trigger the time-bar against against a supplier.