This post begins with an obviousness discussion, then moves to IPR standing, and finally talks about SAS.

Obviousness: In Mylan, the Federal Circuit affirms a PTAB decision siding with the patentee and holding that RCT’s pharmaceutical compound patent claims were not proven unpatentable (i.e., confirming patentability).

The patent at issue is directed toward an enantiomeric isomer (R configuration) of lacosamide. The dependent claims at issue are directed to the use of the drug for anticonvulsant effective (treating epilepsy symptoms). 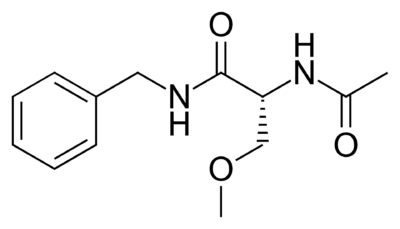 As with most Inter Partes Review (IPR) decisions, the focus is obviousness.  The listed inventor – Harold Kohn – is also the author of the lead prior art reference.

The article identifies a particular compound as the “most active” as a potential anticonvulsant whose structure is shown below. 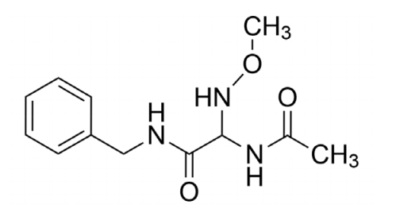 Although the Board decided that there was sufficient similarity to institute the IPR, it ultimately ruled that the modification of the 1991 compound to create lacosamide was beyond ordinary skill in the art.

On appeal, the Federal Circuit affirmed — holding that even if the 1991 compound was an appropriate lead compound the challenger “failed to meet their burden to establish a motivation to modify.”  Here, the challenger relied upon an organic chemistry drug design text for the principle that a developer would be motivated to replace an amine in the 1991 compound with a methylene link to form lacosamide.

According to Appellants, a person of skill in the art would then have been motivated to modify compound 3l by replacing the amine of its methoxyamino group with a methylene link to yield a more stable, synthetically accessible, pharmaceutically common and acceptable moiety.

On appeal, however, the Federal Circuit rejected this approach — holding that the PTAB decision was based upon substantial evidence. In particular, the Board looked at contemporaneous evidence that such a modification would have reduced therapeutic activity.

The case includes an important discussion regarding standing to appeal and the one-year bar under 5 U.S.C. § 319.  Here, Argentum filed the IPR petition in November 2015.  Argentum had not ever been sued under the patent and arguably would not have Article III standing to challenge the patent in court.  However, the IPR statute allows anyone to petition.

After institution, Mylan, Brekenridge, and Alembic all filed their own IPR petitions as well as petitions for joinder under 35 U.S.C. § 315(c).

The joinder petitions were granted.  One quirk here is that the Mylan, Brekenridge, and Alembic IPR petitions would not have been granted on their own since they were all time-barred under 35 U.S.C. § 315(b).  Joinder, however, is a different matter — since the statute expressly indicates that “The time limitation set forth in [§ 315(b)] shall not apply to a request for joinder under subsection (c).”

In the appeal, the original petitioner Argentum dropped-out and did not appeal — and arguably could not have appealed. Only the newcomers, Mylan, Brekenridge, and Alembic, appealed.

On appeal, RCT called foul — on the challengers approach of cobbling together rights.

In the end though, the Federal Circuit found the approach proper under the statute. Once Mylan was joined as a petitioner, it had a statutory right to appeal.

Final point to discuss here involves SAS Institute, Inc. v. Iancu, 138 S. Ct. 1348 (2018).  In that case, the Supreme Court held that the PTAB must either institute as to either (1) all challenged claims or (2) no claims.  The Federal Circuit has expanded that holding to now include a requirement of instituting as to either (1) all grounds for challenge or (2) no grounds at all.

Here, the PTAB instituted as to all challenged claims, but only some grounds for challenge.  In oral arguments (rebuttal), Mylan’s counsel requested, in the “alternative,” that the case be remanded for consideration of all grounds.  On appeal, the Federal Circuit held that the right to remand had been waived. In particular, applicant waited more than 6-months until the rebuttal portion of oral arguments to request the remand. “Given the circumstances in this case, we find that Appellants have waived their request for remand.”

13 thoughts on “Standing on the Shoulders of those Without Standing”