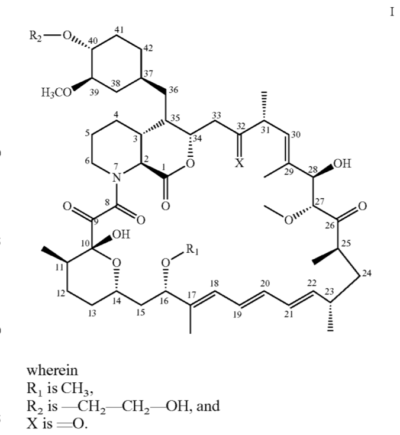 At the time of the patent filing, the compound (everolimus) was already known as an mTOR inhibitor; and mTOR inhibiors were known to inhibit tumor growth. Everolimus a derivative of rapamycin and structurally similar to temsirolimus — both of which were already identified as chemotherapy treatments for similar cancer types.

The district court took this evidence and agreed that a person of skill in the art would have been motivated to pursue everolimus as a potential treatment for advanced solid tumors. However, the court’s opinion then seemed to contradict itself by saying that there was no motivation to combine the prior art.   The district court also found that everolimus was one of many different research paths and that the prior art was not sufficient to create “a reasonable expectation of success in using everolimus” to treat advanced kidney tumors.

On appeal, the Federal Circuit rejected the district court’s confusing motivation-to-combine analysis, but agreed ultimately that the claims were not proven invalid (with clear and convincing evidence).  In particular, the appellate panel agreed with the lack of reasonable expectation of success.

Truthfully, this doctrine confuses me.  The claims simply call for administering an effective amount of everolimus to treat a solid tumor; and the courts held that a person of skill in the art would have been motivated to pursue administration of everolimus as a potential treatment. In addition to this motivation, the courts also require clear and convincing evidence of a “reasonable expectation of success.”  You might divide these into “a reason to try” and “reason to believe that the attempt would be successful.”

A party seeking to invalidate a patent based on obviousness must prove “by clear and convincing evidence that a skilled artisan would have been motivated to combine the teachings of the prior art references to achieve the claimed invention, and that the skilled artisan would have had a reasonable expectation of success in doing so.” Procter & Gamble Co. v. Teva Pharm. USA, Inc., 566 F.3d 989 (Fed. Cir. 2009) (quoting Pfizer, Inc. v. Apotex, Inc., 480
F.3d 1348 (Fed. Cir. 2007)).

Another way to think about the doctrine here is that a creation that is “obvious to try” would still be patentable if the attempt was unlikely to succeed.  This situation comes up most often in situations involving many different potential solutions and it would be “obvious” to try each one until the solution is found.

Motivation to Combine: Regarding motivation to combine, the Federal Circuit particularly held that the district court had improperly required the patentee to prove that PHOSITA “would have selected everolimus over other prior art treatment methods.”  That heightened standard does not comport with the law and thus is not required.

I’ll note here that the district court’s approach was appropriate in the setup involving modification of a lead compound.  Precedent asks for an indication that the lead compound would have been selected over other potential lead compounds.  Here, however, the compound was already known and the only “new” element is giving an effective amount to a patient for the purpose of treating a particular illness.

Reasonable Expectation of Success: Despite a motivation to pursue treatment, the district and appellate court found that the claimed treatment would not have been obvious because the prior art did not show a sufficiently high “expectation of success.”

Note here that the requirement is an “expectation” of success — would PHOSITA have expected that the drug would work?  In this case, at the time of the invention, there was no clinical data on everolimus (as an anti cancer agent) and no completed trials for the other similar compounds (only phase I safety-focused data).  And, the district court noted that there had been many many past attempts to find a compound that works — most of them starting with some promise.   On appeal, the Federal Circuit found that the rebuttal evidence and arguments made by the patentee were sufficient to defeat an obviousness finding — giving deference to the district court factual findings.

The district court reviewed the [presented] evidence, determined that the molecular biology of advanced RCC was not fully understood, recognized the limitations in the temsirolimus phase I data, and found that such data did not provide a person of ordinary skill with a reasonable expectation of success. We hold that the district court did not err in its determination and affirm its conclusion that claims 1–3 of the ’131 patent would not have been obvious in view of the asserted prior art.

58 thoughts on “Although Motivated to Try; No Reasonable Expectation of Success”