The patent here covers a method for customizing game characters. The method begins with shopping for an avatar – via an “avatar shop”; then, a set of “game item functions” are combined with the avatar (via layers).  A game item function might be “a function for attacking or defending other gamers” or perhaps “a function for charging cyber money.”  Once these “game functions” are added to the avatar, it becomes a “GAMVATAR.” Figure 5 of the patent (below) explains the equation: Avatar + Item (function) = Gamvatar.  The infringement lawsuit involving the ‘743 was administrative closed after the PTAB decision here. 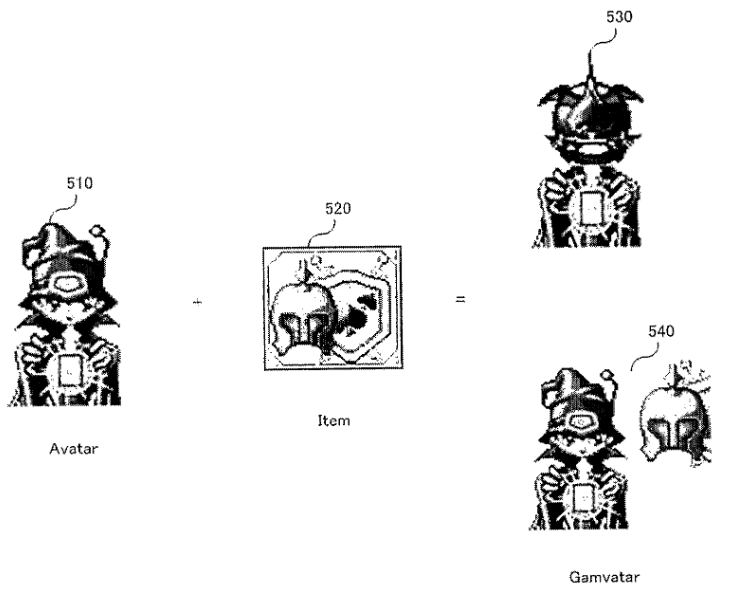 In the appeal, GAT provided an oddball claim construction argument — arguing that the “avatar” must represent the user in cyberspace outside of game play and even game-related functions.  That narrowing definition of the term would be helpful in avoiding some of the prior art.  The narrowness has some limited support in the specification, but is really rejected by the claim language which simply calls for choosing an avatar from a store.

GAT also suggested an oddball definition for the “layer” used to combine the game-function with the avatar.  In the drawing above, the layer is visible and GAT argued that Layer should be construed as a visible element of the display. The key problem here as noted above is that examples of the layer include functions not displayed on the character (such as the ability to charge money).

So, obviousness affirmed. Everyone keep making your characters (I mean gamvatars).

I have not spent a lot of time researching the details of this case, but the patentee’s claim construction arguments here appear pretty weak — we’re talking thin slices of bologna. My sense is that claim construction has moved into a more-predictable process under Phillips – a process that that will be further enhanced by the PTAB’s application of that approach in AIA trials.

providing an avatar to a user accessing an avatar shop via a network, the avatar comprising multiple layers for displaying avatar functions or performing game item functions by using the respective layers; and