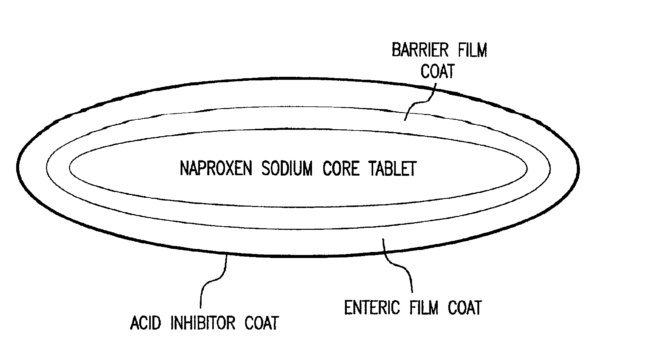 (a) esomeprazole, wherein at least a portion of said esomeprazole is not surrounded by an enteric coating; and

(b) naproxen surrounded by a coating that inhibits its release from said unit dosage form unless said dosage form is in a medium with a pH of 3.5 or higher;

The defense raised a written description issue – arguing that the original patent filings did not support the “therapeutically effective” limitation.  The district court sided with the patentee, but the Federal Circuit reversed on appeal and held the claims invalid. In particular, the Federal Circuit found that PHOSITA could not tell from the patent document that the compound was “therapeutically effective” as claimed.

Obviousness – Written Description Interplay: The amount of written description needed varies from patent to patent depending upon a number of factors — including the level of skill in the art.  An invention that far-exceeds the state-of-the-art will need more description in order to show possession of the invention.

In this case, the patentee won its obviousness argument by showing PHOSITA would not have reasonably expected the combination to work.  As such, that means that the claim elements must be fully described in the specification.

The Court also explained that the written description requirement does not always require proof that a claimed drug treatment is effective.  The difficulty for the patentee here, is that the treatment’s effectiveness is particularly claimed.

The Patentee has now petitioned the Federal Circuit for rehearing en banc and explained the holding as follows:

The petition argues that this approach is improper:

Following the en banc petition, the Federal Circuit requested a response from Dr. Reddy’s who filed a short brief arguing primarily that Nuvo created a false “parade of horribles” that mischaracterize the Federal Circuit’s opinion.