The priority filing of Collabo’s U.S. Patent No. 5,952,714 reaches back to  1995.  Although the patent is now expired, Sony filed this inter partes review (IPR) to avoid back damages.  The pending infringement litigation was stayed pending outcome of the IPR.  For its part, Collabo is a subsidiary of the licensing company Wi-Lan, who bought several hundred patents from Panasonic.

The patent covers an improved solid state image sensor used in cameras. Here, the improvement is a reduction in manufacturing costs by increasing the size of the housing inlet (26) — allowing the chip (27) to be inserted more easily (from below in the drawing). 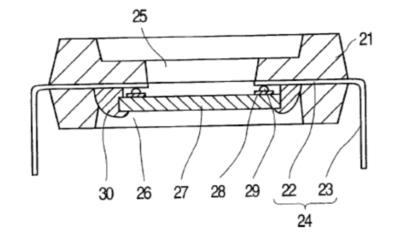 The odd part of the patent comes in how this “wider” inlet was claimed. In particular, the claims state that the inlet “has a wider area.”  Of course, “wider” is typically a modifier of single-dimension measurements and “area” mathematically requires two-dimensions.  That said, an “area” might be thought of more generally as a planar space that might be either wider or narrower, taller or shorter.

Which of my two figures above have the “Wider Area?”

In its claim construction, the Federal Circuit agreed with the Board, that “wider area” might be a smaller area, so long as one dimension is wider.  The Court particularly notes that the specification uses “larger area” when considering the actual area, but “wider” when looking at one dimension of the space.   That construction meant that the prior art was easier to link to the claims and support the Board’s invalidity finding.

Claim Coverage Argument ==> Claim Construction Demand: Neither party asked the Board to construe the “wider” term.  However, the Board went ahead and construed the term after finding that it was in issue. On appeal, the Federal Circuit affirmed this approach, explaining:

Collabo itself placed the meaning of ‘wider area’ at issue. It argued that the asserted prior art references did not disclose the “wider area” limitation because they failed to show or describe the relative areas—both length and width—of their openings.

84 thoughts on “Which Area is Wider?”