In its final written decision, the PTAB sided with the patent challenger Emerson Electric — finding claims of SIPCO’s U.S. Patent 8,908,842 invalid as lacking eligibility and as obvious. Claims 1, 7, 9, 16, and 17.

The patent at issue requires a “low-power transceiver” connected to the internet and wirelessly connected to a remote device.  The patent included dependent claims 3 and 4 that defined the remote device as a “vending machine” and “ATM” respectively.  However, those claims were disclaimed during prosecution — and part of appeal argument is the role of disclaimed claims in construction of the remaining claims. 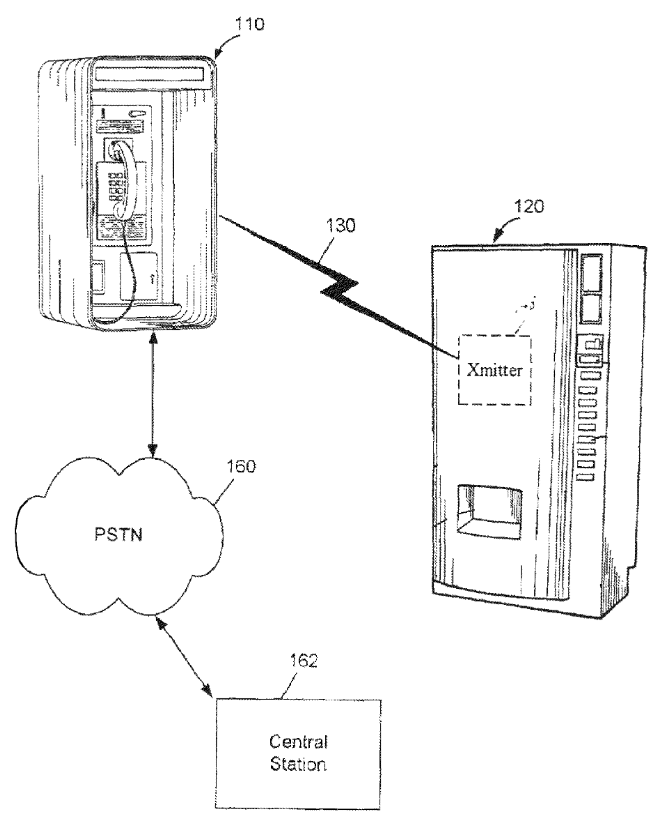 Note for younger attorneys, the item labeled 110 is a “pay phone.”

Covered Business Method Review (CBM) allows a third-party to challenge to certain business-method patents in an AIA-Trial.  Inter partes review (IPR) proceedings are limited to novelty and obviousness challenges and “only on the basis of prior art consisting of patents or printed publications.”  35 U.S.C. 311.  Post-grant review (PGR) proceedings have much broader scope — any condition of patentability except best-mode. 35 U.S.C. 321.  However, PGR proceedings may only be filed against post-AIA patent and must be filed within 9 months of issuance.

The third category – CBM – has the same scope of patentability challenges as PGR  (including eligibility, enablement, and indefiniteness), but can only be filed against patents that meet the definition of a “covered business method patent”

a patent that claims a method or corresponding apparatus for performing data processing or other operations used in the practice, administration, or management of a financial product or service, except that the term does not include patents for technological inventions.

SEC. 18 of the AIA. Looking at the definition above, you’ll note that this is a narrow definition of a “business method” patent — especially the notion that it cannot cover “patents for technological inventions.” (Technological is left undefined in the statute).  Note, the CBM provisions are not codified in Title 35 because the program is not permanent — it is set to sunset 8-years after the first CBM was permitted to be filed. My calculation of that date is September 16, 2020 and no new petitions will be accepted after that date.

NonAppealable: In the appeal, SIPCO argues that its patent is a technological invention and thus should be immune from CBM challenge. And, although the PTO’s decision to initiate a CBM proceeding is “nonappealable,” the Federal Circuit has repeatedly ruled that it can review the PTO decision of whether the challenged patent satisfies the legal limits of the CBM process — i.e., whether the patent challenged in a CBM is a technological invention.

Two Step Test for Technological: The USPTO has issued regulations defining technological inventions as requiring (1) recitation of a nonobvious technological feature; and (2) solving a technical problem using a technical solution.  37 C.F.R. § 42.301(b).  Thus, claims that recite “post-solution” technology could still be deemed not technological.  A reminder here – that the judgment of whether a patent is amenable to CBM review is considered on a patent-by-patent basis — it is either all-in or all-out — and not on a claim-by-claim basis.

After reviewing “both the claims and the specification,” the Federal Circuit concluded that the invention satisfied step two of the two step test – the invention “implements a communication system that connects an unconnected, remote device with a central station . . . by taking advantage of a set of intermediate nodes … connected to the central station over an existing communication network.”  The patent discusses the problems of signal interference, contention, and hacking — and offers its solution of using a “two-step” communications and low-powered transceivers that limit transmission range.  The PTAB had not considered step 1 and so on remand the PTAB will consider whether the claims recite nonobvious technological features.  Although the court left this issue for the PTAB to decide, it noted that the nonobviousness here might be a different sort of analysis than what is used for Section 103.

Low Power = Limited Range: The Federal Circuit’s conclusion of technological solution is substantially based upon a narrow claim construction of the term “low power transceiver.”  The court found that the term should be interpreted (as properly read in light of the specification) as meaning a transceiver with a limited transmission range.  That result comes from one of the goals of the invention — avoiding conflict between transceiver communications. “It is only if the signal transmission is limited in range that the problems of unwanted circumvention, contention, and unlawful interception of the electromagnetic signals described in column six [of the patent] are alleviated.”  This construction differs from the PTAB who had found the “low power” aspect of the transceiver did not necessarily limit its range to only a few feet. This “limited range” aspect of the invention appears to be the major key to the technological result.

Writing in dissent, Judge Reyna argued that the construction of “low power” as meaning “low range” involves “improperly reading a functional limitation into the claim from a preferred embodiment.”

Looking back to the Vending Machine and ATM limitations of cancelled Claim 3 & 4. The PTAB used those claims (and the written description) to conclude that the invention was “financial” in nature — a qualifying characterization for CBM review.  On appeal, the majority affirmed the agency’s determination.

As the Board explained, claims 3 and 4 recite the remote device being associated with an ATM or vending machine. The patent expressly contemplates that the information communicated through the claimed system is financial information that identifies the user’s bank account and the user’s identity. The Board is correct in its assessment that the concept of communicating financial information from a device associated with an ATM to a central location is “central to the operation of the claimed device” in claim 3.

Those two claims were disclaimed and SIPCO originally argued that they could not be used to show that the patent was a CBM patent.  However, at oral arguments SIPCO’s attorney conceded that it was proper for the PTO to consider those claims in its analysis.

36 thoughts on “Here’s a Quarter … : Continued Tricks in Defining what as a Covered Business Method Patent”