This short copyright decision has some interesting holdings regarding copyright infringement and LLCs.

The basics are that Sidelines Pub & Grub exhibited a PPV fight (2017 Mayweather vs. McGregor) without paying the license fee to the US promoter Joe Hand.

One of the defendants is Angie Barraza. Barraza was minority owner in the business (10%); was a daytime manager of the bar; but apparently had no knowledge of the alleged unlawful activity.

Barraza claims that all of the unlawful activity alleged in the complaint fell under the purview of Scott Alburl [Barraza’s husband at the time] and was orchestrated and carried out by him without her knowledge or assent. Barraza also stated that, even if she had known about her former husband’s activities with regard to the Program, she would not have been able to stop him because, she says, Alburl was abusive and deceitful towards her in their marriage.

The problem is that the ex-husband is in default.  Prior to the infringement another co-owner “sold” his rights to the business back to Alburl for “the amount of $0.00.”  The bar was never profitable and is now closed.  So . . . Barraza is the only one with money to pay. 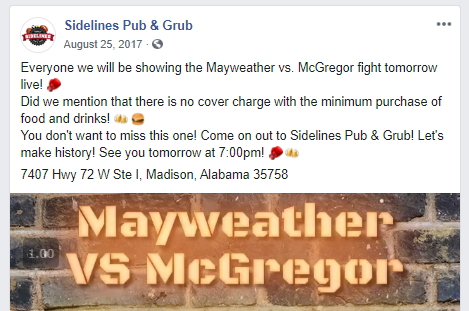 Liability for Owner: Assuming that Barraza’s allegations are true, the Court must determine whether, despite her alleged limited ownership and control of Sidelines33, LLC, she can still be held vicariously liable for the infringing conduct of Alburl and Sidelines33, LLC.

In its opinion, the court appeared to have no concern regarding the role of “limited liability” or limits on officer liability. The court explains:

All business owners share in both the gains and losses of their businesses. Had the business been profitable, Barraza would have been entitled to a share of those returns. However, she can not now disclaim her interest in the business to avoid its liabilities.

The court went-on to explain that Barraza’s “level of influence” over the company activities is immaterial and irrelevant “for the purpose of determining whether she is jointly liable for the business’s copyright infringement.”

The statutory damage regime offers an award of $750 – $30,000 for each copyrighted work infringed.  That award can be increased to $150,000 for willful infringement, and lowered to $200 for innocent infringement.

(1) … the copyright owner may elect … an award of statutory damages … for which any two or more infringers are liable jointly and severally, in a sum of not less than $750 or more than $30,000 as the court considers just.

Joe Hand asked for $24,000 in statutory-damages — treble $8,000 standard license for this size of bar showing the fight.   Barraza asked that the court lower the damages to the $200 minimum for innocent infringement.

In its decision, the court found that willfulness damages would be appropriate even though Barraza may have acted be innocent herself.

The infringement at issue in this case was willful. . . .  Barraza appears to misunderstand the concept of vicarious joint and several liability. As noted above, the Plaintiff is not required to even prove that she had knowledge of or participated in the infringement. Rather, as an owner, the infringing actions of Sidelines are imputed to her.

Since the underlying infringement was willful — that willfulness can be imputed onto Barraza as the business owner. Accordingly, the amount of statutory damages is between $750 and $150,000.”

The statutory damages provision is written to suggest that the court (i.e., the judge) would set the amount of statutory damages “as the court considers just.”  However, the Supreme Court held in Feltner v. Columbia Pictures Television, Inc., 523 U.S. 340 (1998) that statutory copyright damages serve as substitute for regular damages in a way that preserves the Constitutional right to a Jury Trial. “[I]f a party so demands, a jury must determine the actual amount of statutory damages under § 504(c) in order to preserve the substance of the common-law right of trial by jury.” Id. (internal citations omitted).