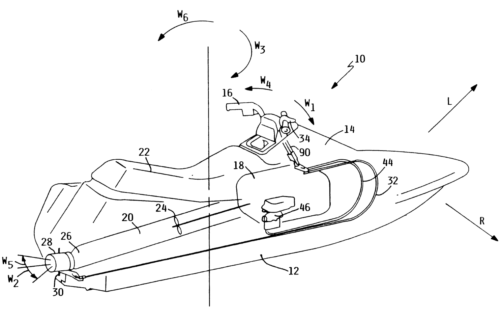 In this case, Arctic Cat had stopped manufacturing its patented thrust steering systems by the time the patent had issued — so no marking possible there.  However, Arctic Cat had licensed several of its patents to Honda, including the patents at issue here.  A couple of details regarding the license are important here: (1) The license was agreed-to prior to the issuance of the patents at issue and so did not expressly name them by patent number. However, the license expressly includes later-patents covering Thrust Steering. (2) The license expressly states that Honda has no marking requirements.

Honda made & sold products under the license and did not mark the products with Arctic Cat’s patent numbers.  Although disputed, Honda arguably stopped making covered-products in 2013.  Arctic Cat then sued Bombardier in 2014.   The question then on appeal is how-far back can Arctic Cat collect damages:

Holding: The answer by the court is #1 – Arctic Cat won’t get any pre-filing damages.

Looking back to the statute — the key line calls for “proof that the infringer was notified of the infringement.”  287(a).  The court holds here that “notified of the infringement” requires an action by the patentee to provide actual notice. This outcome is similar to what is required by Fed. R. Civil Procedure R. 4(c) which places the burden on the plaintiff for providing notice of a new complaint being filed. A key difference though is that the rules of civil procedure actually spell out that “the plaintiff is responsible for having the summons and complaint served.” I’ll note here that the “filing” of a lawsuit triggers notice under 287 — service of the complaint and summons is seemingly not required. It is also different outcome than the notice requirement found in property recording statutes, including 35 U.S.C. 261 which asks whether a “subsequent purchaser” was “without notice.”

The language of Section 287 at issue here stems from the Patent Act of 1861. That statute indicated that – absent marking – “no damage shall be recovered by the plaintiff, except on proof that the defendant was duly notified of the infringement, and continued after such notice to make or vend the article patented.”  In an 1894 decision, the Supreme Court found that the “duly notified” statement requires an action by the patentee to provide notice.

The clear meaning of this section is that the patentee or his assignee, if he makes or sells the article patented, cannot recover damages against infringers of the patent, unless he has given notice of his right, either to the whole public, by marking his article ‘Patented,’ or to the particular defendants, by informing them of his patent, and of their infringement of it.

In an interesting article, Michael McKeon argues that the Federal Circuit’s approach of requiring “an affirmative act” is actually based upon “a specific misquote of a critical word (act instead of fact).” Michael J. McKeon, The Patent Marking and Notice Statute: A Question of “Fact” or “Act”?, 9 Harv. J.L. & Tech. 429, 431 (1996). McKeon argues that Dunlap and Coupe were both about placing a burden of proof on the patentee — the patentee must affirmatively prove the fact that notice occurred — and that the Federal Circuit mistakenly read the cases as requiring an affirmative act of providing notice. McKeon cites to several pre-Federal Circuit cases that find actual notice is sufficient even without affirmative notice from the patentee. See, for instance, Warner v. Tennessee Products Corp., 57 F.2d 642 (6th Cir. 1932) (“Actual notice of the issue and contents of the patent, and of the claims that a practice infringes, is sufficient regardless of the source of such notice.”); Abington Textile Mach. Works v. Carding Specialists (Canada) Ltd., 249 F. Supp. 823, 849 (D.D.C 1965) (defendant’s actual/constructive notice was sufficient even though prior to formal notice from the patentee).