The assignor estoppel doctrine (a doctrine in equity) potentially becomes more important in times of economic upheaval. Through layoffs, mergers, and acquisition of underperforming companies, patents are more likely to end up in the hands of someone other than their original owner or assignee.  Conflicts then arise when that original inventor (or prior owner) reenters the market and begins to compete against the new patent owner. The doctrine of assignor estoppel operates to bar the original inventory from later challenging the validity of the patent. An oddity of Federal Circuit precedent though, is that assignor estoppel does not apply to USPTO IPR Actions.

In its decision here, the Federal Circuit reluctantly enforced the assignor estoppel doctrine noting that the court is “bound to follow” its prior precedent. Judge Stoll penned the opinion that was joined by both Judge Wallach and Judge Clevenger. Judge Stoll also filed a set of “additional views” suggesting that “it is time for this court to consider en banc the doctrine of assignor estoppel at it applies both in district court and in the Patent Office.”

We should seek to clarify this odd and seemingly illogical regime in which an assignor cannot present any invalidity defenses in district court but can present a limited set of invalidity grounds in an IPR proceeding.

Hologic v. Minerva centers on the work of inventor and entrepreneur Csaba Truckai and relates to a medical device for detecting uterine perforations.  The basic idea is that the device pumps gas into the uterus and then measures the pressure for a few minutes to see if gas has leaked-out. U.S. Patent Nos. 6,872,183 and 9,095,348. 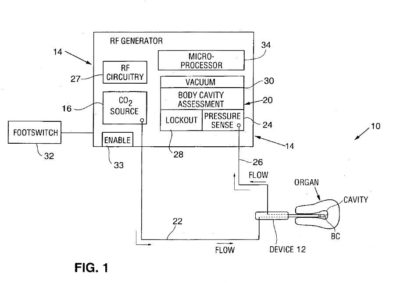 This is a bit of a tale: Back in the 1990’s Truckai invented and assigned rights to his company NovaCept. NovaCept was later acquired by Cytec Corp. and then Hologic acquired Cytec. Truckai was still around for those buyouts and made a substantial amount of money.  Meanwhile, Truckai left the company in 2008 and founded a new company Minerva that now competes with Hologic.

When Hologic sued Minerva, the defendant responded with several invalidity defenses and also petitioned the PTAB for inter partes review of the two patents.  For its part, the Board granted review of the ‘183 patent and found the claims unpatentable as obvious. The Board denied review of the ‘348 patent.

Meanwhile, the district court case continued with the district court judge applying assignor estoppel to prevent Minerva from asserting invalidity defenses in district court — holding that “Truckai is in privity with Minerva.”  A jury then sided with the patentee and awarded $5 million in damages for the two patents. Although the ‘183 patent had been cancelled in the IPR, the District Court judge did not give the PTAB judgment any preclusive effect because that issue was then on appeal.  Subsequently, the Federal Circuit affirmed the PTAB’s cancellation of the ‘183 patent claims.

On appeal, the Federal Circuit first rejected the district court’s clearly erroneous decision giving no effect to the PTAB cancellation (affirmed by the Federal Circuit).  The court explained that the PTAB judgment renders the claims retroactively “void ab initio.”  In an unusual statement, the court stated that it was “mindful of the seeming unfairness to Hologic in this situation.”  The apparent unfairness is that the company will not be able to enforce a patent that has been invalidated.

For the remaining ‘348 patent, the defendant Minerva asked the court to “abandon the doctrine” entirely. Barring that, Minerva suggested that the doctrine should not apply to the ‘348 patent — which is a continuation of Truckai’s original patent filing with substantially broadened claims.  The court resisted — holding that “equities weigh in favor of its application in this case.”

Westinghouse does allow for an accommodation in such circumstances. To the extent that Diamond may have broadened the claims in the patent applications (after the assignments) beyond what could be validly claimed in light of the prior art, Westinghouse may allow appellants to introduce evidence of prior art to narrow the scope of the claims of the patents, which may bring their accused devices outside the scope of the claims of the patents in suit.  exception to assignor estoppel also shows that estopping appellants from raising invalidity defenses does not necessarily prevent them from successfully defending against Diamond’s infringement claims.

In Diamond Sci., the Federal Circuit was a little cagey on this right-to-narrow-claim-scope (“Westinghouse may allow . . . [the doctrine] does not necessarily prevent …”).  Here, the court is more explicit: “[T]his court’s precedents allow Minerva to introduce evidence of prior art to narrow the scope of claim 1 so as to bring its accused product outside the scope of claim 1.” (internal quotes removed). The basic idea here is that an estopped party can avoid infringement by showing “that the accused devices are within the prior art and therefore cannot infringe.”  Mentor Graphics Corp. v. Quickturn Design Sys., Inc., 150 F.3d 1374 (Fed. Cir. 1998) citing Scott Paper Co. v. Marcalus Mfg. Co., 326 U.S. 249 (1945). In his article on the topic, Prof. Mark Lemley suggests this narrowing-the-claim a “promise is likely illusory in modern patent jurisprudence, which has all but eliminated the ability to argue that claims should be narrowed to avoid invalidating prior art.”

On damages, the jury was asked for the damages associated with infringing the two patents without requiring any patent-by-patent apportionment.  Since one of the patents is invalid, you would think this would require a new trial on damages.  However, the Federal Circuit has a big exception that allows the damages award to stand “if, despite the fact that some of the asserted claims were held invalid or not infringed subsequent to the award, undisputed evidence’ demonstrated that the sustained patent claim was necessarily infringed by all of the accused activity on which the damages award was based.” (citing Western Geco).

Here, the damages verdict is supported by the jury’s finding that the accused products all infringed Claim 1 of the still-valid ‘348 patent.  This was further supported by the patentee’s damages expert who testified that the damages should be the same regardless of whether the jury finds infringement of one patent or both patents. Since “Minerva did not present any contrary evidence,” any error in jury instruction is deemed harmless.