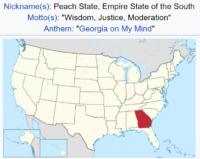 The State of Georgia claims copyright to its Annotated Official Code (Official Code of Georgia Annotated (OCGA)).  The (e)book includes every Georgia statute and a set of annotations (including summaries of cases and articles discussing the statutes).  The OCGA is created by a state entity – the Code Revision Commission – directed by the state legislature.  LexisNexis actually did the work of writing the annotations, but copyright (if any) originated with Georgia as a work-made-for-hire.

Public.Resource.Org (PRO) is a nonprofit organization facilitates public access to government records. PRO copied the OCGA and began freely distributing it to the public. Georgia then sued for copyright infringement.

After some amount of litigation, Georgia eventually stopped arguing that the statutes themselves were protectable by copyright.  However, the state continued to argue that the annotations were copyrightable since they did not carry the force of law.

The Supreme Court has now sided with PRO and against the state – holding that the government edicts doctrine prohibit copyright on the annotations.

Over a century ago, we recognized a limitation on copyright protection for certain government work product, rooted in the Copyright Act’s “authorship” requirement. Under what has been dubbed the government edicts doctrine, officials empowered to speak with the force of law cannot be the authors of—and therefore cannot copyright—the works they create in the course of their official duties. . . .

[This doctrine] applies to non-binding, explanatory legal materials created by a legislative body vested with the authority to make law. Because Georgia’s annotations are authored by an arm of the legislature in the course of its legislative duties, the government edicts doctrine puts them outside the reach of copyright protection.

Slip Op.  Chief Justice Roberts penned the majority opinion that was joined by Justices Sotomayor, Kagan, Gorsuch, and Kavanaugh.  Two dissenting opinions: Justice Thomas (with Justice Alito, and Justice Breyer except FN6); and Justice Ginsburg (with Justice Breyer).  The split here does not fall along typical liberal-conservative grounds, but does suggest a generational shift — with the five youngest in the majority, and the four eldest siding with the State. (All of the justices are well over the median age of US citizens).

The majority opens with  a controversial statement linking copyright with monopoly: “The Copyright Act grants potent, decades-long monopoly protection for ‘original works of authorship.'”  Often, as here, courts refer to patents & copyrights as “monopolies” when they are ready to invalidate or weaken the rights granted. See also,  Sony Corp. of America v. Universal City Studios, Inc., 464 U. S. 417 (1984).

The majority opinion also disparages fair use as insufficient:

If Georgia were correct, then unless a State took the affirmative step of transferring its copyrights to the public domain, all of its judges’ and legislators’ non-binding legal works would be copyrighted. And citizens, attorneys, nonprofits, and private research companies would have to cease all copying, distribution, and display of those works or risk severe and potentially criminal penalties. §§501–506. Some affected parties might be willing to roll the dice with a potential fair use defense. But that defense, designed to accommodate First Amendment concerns, is notoriously fact sensitive and often cannot be resolved without a trial. Cf. Harper & Row, Publishers, Inc. v. Nation Enterprises, 471 U. S. 539, 552, 560–561 (1985). The less bold among us would have to think twice before using official legal works that illuminate the law we are all presumed to know and understand.

Id. According to its new reinvigoration, the government edicts doctrine does have some clear limits — it only applies to works created by those with “authority to make or interpret the law.”

In this case, the folks at Westlaw make their own annotated version that is likely protected by copyright (assuming originality).  As part of his dissent, Justice Thomas notes that Official Code (by LexisNexis) sells for $404 while WestLaw’s version is $2,570.  LexisNexis agreed to sell at its “low” price as part of the deal with the state, and the state argued that copyright is instrumental in facilitating creation of high-quality annotations.  Otherwise, it just won’t happen. Siri, follow up in two years to see whether this prediction turns out to be true.

Upcoming big issues on this front include the various building codes that are typically created by non governmental entities, but then adopted by various municipal governments.