Patent attorney Christopher Rudy has been pursuing his fishing hook and fishing method patent application since 1989. The current set of claims have been deemed ineligible under 35 U.S.C. 101. In particular, the court found the claims directed to the “abstract idea of selecting a fishing hook based on observed water conditions.”

The claim at issue has three basic steps: 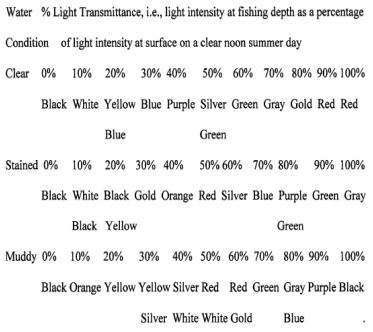 In the appeal, the Federal Circuit agreed with the PTO that the hook color selection is a “mental process” that relies upon generalized actions of “collecting” and “analyzing” information.

[The claim] requires nothing more than collecting information (water clarity and light transmittance) and analyzing that information (by applying the chart included in the claim), which collectively amount to the abstract idea of selecting a fishing hook based on the observed water conditions.

The inventor’s brief explains that the fish are able to make the same color selection, and the process here apparently mimics their color selection preferences.  On appeal, the Federal Circuit found that piscatory mental processes tend to suggest that the invention is unpatentable.

While we decline today to adopt a bright-line test that mental processes capable of being performed by fish are not patent eligible, this observation underscores our conclusion that claim 34 is directed to the abstract idea of selecting the color of a fishing hook.

Id. The court does not offer an explanation for its conclusion other than a cite to Elec. Power Grp. (statements regarding human mental processes). Perhaps a cite to Enfish, LLC v. Microsoft Corp., 822 F.3d 1327 (Fed. Cir. 2016).

The court suggested that the claimed method might become patent eligible if the measurement techniques were limited to a particular method or instrumentality. “Because the claims before us are not limited in the way Mr. Rudy suggests, we are not in a position to opine on whether theoretical claims that were so limited would be patent eligible.”

Here, the court repeated its prior statements that the PTO guidance on patent eligibility does not bind or limit the Federal Circuit in any way. “To the extent the Office Guidance contradicts or does not fully accord with our caselaw, it is our caselaw, and the Supreme Court precedent it is based upon, that must control.”

Rudy also envoked the machine-or-transformation test — referring to the fact that the fish was originally free but was then caught.  On appeal, the Federal Circuit confirmed that the test remaines a “useful and important clue” to eligibility.  However, the claim here does not require actually catching a fish.  Rather, as Rudy explained in his own briefing: “Landing a fish is never a sure thing. Many an angler has gone fishing and returned empty handed.”  Perhaps the adage here should replace “angler” with “appellant.”  No Patent for Rudy (Yet).