The jury sided with Ericsson — holding that TCL willfully infringed the two asserted claims of Ericsson’s US7149510 and awarded $75 million in compensatory damages. Judge Payne then added an additional $25 million enhanced damages for the adjudged willfulness. 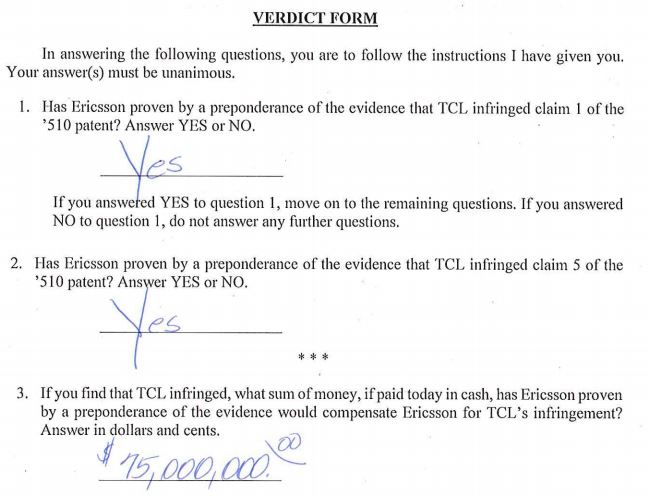 On appeal, a divided Federal Circuit has reversed judgment — holding that the asserted claims are actually invalid as a matter of law as being directed toward ineligible subject matter under Section 101.  Majority Opinion by Chief Judge Prost and joined by Judge Chen. Dissenting Opinion by Judge Newman.

The bulk of the case focuses on waiver of TCL’s right to appeal – with the majority finding no waiver.

During the litigation, TCL moved for summary judgment of ineligibility.  The district court denied that motion after finding that the patent was not directed toward an abstract idea. The case continued then continued to trial and judgment as noted above.

After being denied summary judgment, a moving party typically needs to take a couple of steps in order to preserve the argument for appeal.  Preservation is necessary because the summary judgment motion is seen as effectively moot once trial starts, and so the party needs to make a post-trial renewed motion for Judgment as a Matter of Law (JMOL) under Fed. R. Civ. Pro. R.50(b) (or similar post-trial motion) in order to preserve the issue for appeal.  And, under the rules, a R. 50(a) JMOL motion (made during trial) is a prerequisite to the post-trial R.50(b) renewed JMOL motion. An appeal can then follow if the judge denies the R.50(b) motion.  Here, TCL did not file a JMOL motion or any other post-trial motion on eligibility, but instead simply appealed the Summary Judgment denial — typically a non-starter on appeal.

The waiver rule is different when Summary Judgment is granted.  A grant of summary judgment finishes litigation on the issues decided, and those issues are fully preserved for appeal.

Coming back to this case: Many denials of summary judgment are based upon the existence disputed issues of material fact.  And, even when a defendant’s SJ motion is denied, the defendant may still win the issue at trial.  Here, however, when the district court denied the ineligibility SJ motion there was nothing left for the jury to decide.  Using that logic, the majority held that when the court denied TCL’s ineligibility SJ motion, it effectively effectively granted SJ of eligibility.  Critical to this determination is the appellate panel’s finding that “no party has raised a genuine fact issue that requires resolution.”  With no facts to decide, the question became a pure issue of law: either it is eligibile or it is ineligible. “As a result, the district court effectively entered judgment of eligibility to Ericsson.”  And, as I wrote above, a grant of summary judgment is appealable.

Writing in dissent, Judge Newman argues that the majority’s conclusion that pre-trial denial of SJ on eligibility is the same as a final decision going the other way “is not the general rule, and it is not the rule of the Fifth Circuit, whose procedural law controls this trial and appeal. . . . The majority announces new law and disrupts precedent.”

TCL did not pursue any Section 101 aspect at the trial or in any post-trial proceeding. . . . TCL took no action to preserve the Section 101 issue, and Section 101 was not raised for decision and not mentioned in the district court’s final judgment.

There is no trial record and no evidence on the question of whether the claimed invention is an abstract idea and devoid of inventive content. The panel majority departs from the Federal Rules and from precedent.

The majority also went on to say that its “authority is total” in deciding whether to hear an appeal because there is “no general rule.” “We have the discretion to hear issues that have been waived.”  (The first quote is not actually from the court but something I read in the news).  The court here oddly includes the following statements:

Majority opinion (concluding that if appeal was waived, the court would exercise its discretion to hear the appeal).

On the merits of the invention, the majority and dissent also disagree. As you can read below, the claims are directed to a system for software-access-control and the majority found it directed to the “abstract idea of controlling access to, or limiting permission to, resources.”  The district court instead found that the claims were directed to an “improved technological solution to mobile phone security software.”

1. A system for controlling access to a platform, the system comprising:

an interception module for receiving a request from the requesting application domain software to access the software services component;

wherein the requesting application domain software is granted access to the software services component via the at least one interface if the request is granted.

5. The system according to claim 1, wherein:

the security access manager has a record of requesting application domain software;

and the security access manager determines if the request should be granted based on an identification stored in the record.