PhaZZer defaulted in the litigation and the district court awarded $7.8 million to Taser. On appeal, the Federal Circuit quickly issued a R.36 no-opinion affirmance in 2019.  Then, in February 2020 the USPTO finally cancelled the claims of the asserted patent (via reexamination). US7234262. 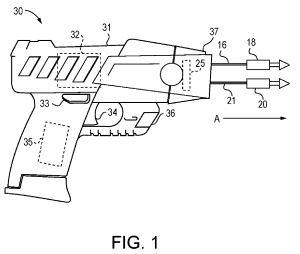 Because of the bankruptcy stay, PhaZZer apparently had time to wait for the USPTO reexamination decision, although that case has not yet been appealed to the Federal Circuit. In its new petition for certiorari, Phazzer argues that the damages should be void ab initio and asks the Supreme Court to remand the case to the Federal Circuit for such a ruling.

Petitioner requests that either this Petition for
Writ of Certiorari be granted or, preferably, the issue be remanded to the Federal Circuit for
reconsideration of its Order affirming the District Court judgment so that the action can be remanded to District Court to vacate the patent damages.

1) Is the Federal Circuit affirmation of the patent damages now incorrect in light of the change of circumstances created by the USPTO cancellation of all patent claims?

2) Is remand to the US Court of Appeals for the Federal Circuit timely and appropriate in light of the change of circumstances created by the USPTO cancellation of all patent claims?

3) Does Respondent [the Patentee] lack standing to assert the patent claims following the USPTO cancellation?

This case is related to the pending petition in Chrimar where the petitioner is arguing that timing of USPTO cancellation is important — namely that USPTO cancellation should not be used to undermine an already issued district court final judgment.  The Supreme Court is considering the Chrimar petition in its penultimate conference of the term on June 18, 2020.

26 thoughts on “When does a PTO Cancellation undermine a District Court Judgment of Infringement?”