I’m sure that there will be a few references to the Aunt Jemima trademarks in upcoming law review articles. Let me direct you to a handful of court decisions regarding the mark. The cases offer an important look at how judges saw race & commerce in the mid-20th century.

The courts here effectively concluded that only one company could sell flour (or syrup) branded with the caricature of a black-skinned person.

It would be difficult to imagine a more flagrant violation of the statute than the one here presented. The red core of the watermelon with its seed spots, held under the chin of the negro, is a good reproduction of the red bandana with its spots, tied around the neck of the negress. A mere glance at the marks is convincing. No evidence of confusion is necessary, nor can any amount of fine-spun discrimination withdraw the case from the direct operation of the statute. The opposition should have been sustained.

Id. A second case before the same court three years later resulted in the same outcome. Aunt Jemima Mills Co. v. Blair Milling Co., 270 F. 1021 (D.C. Cir. 1921).  In this case, Justice Van Orsdel again wrote the opinion and explained that the use of a dark-skinned man was confusingly similar to Aunt Jemima’s logo.

40 years later, Judge Giles Rich disparaged these prior rulings – concluding that the images were “quite dissimilar pictures” with differences that would have been “obvious to any child” Planters Nut & Chocolate Co. v. Crown Nut Co., Inc., 305 F.2d 916 (Cust. & Pat. App. 1962). In particular, Judge Rich notes that the Kirkland “good enuf” image was a male wearing a “colonial type hat and holding in his hands a slice of red watermelon” and the Blair Milling image was a clean-shaven male wearing a cook’s uniform of a white cap and long white apron, “bearing in one hand a plate of wheat cakes and in the other hand a cake turner.” Id.  In his view, neither of these would create any confusion with the image of Aunt Jemima.

A third Aunt Jemima case from 1917 is the more famous. Aunt Jemima Mills Co. v. Rigney & Co., 247 F. 407 (2d Cir. 1917).  Rigney started selling “Aunt Jemima” branded maple syrup (name + image) without the permission or consent of the Aunt Jemima company (who at the time did not make syrup).  The Second Circuit (Judge Ward) sided with Aunt Jemima Mills – holding that “[n]o one has a right to apply another’s name to his own goods” even if not in direct competition and no provably damages.  The court then awarded an injunction to stop the use. Judge Learned Hand dissented and would have awarded no injunction because of acquiescence (8 year delay). The 2nd Circuit does not comment on the content of the mark other than remarking that it “consists of the words ‘Aunt Jemima’s,’ accompanying the picture of a negress laughing.” In a decision a few years later, the 2nd Circuit redescribed the mark as a “fanciful picture of a colored woman.” Anheuser-Busch v. Budweiser Malt Products Corp., 295 F. 306 (2d Cir. 1923).

The final case I’ll discuss here is Gardella v. Log Cabin Products Co., 89 F.2d 891 (2d Cir. 1937).  The decision here identifies Tess Gardella as “a white woman, of Italian extraction” who was a fairly famous actress who went by the stage-name Aunt Jemima (and applying black-face). “She said the Aunt Jemima character suggested itself to her because as a child she received that name from a colored maid who cared for her.”  Gardella sued after an Aunt Jemima radio advertising campaign — alleging unfair competition and rights of publicity. She was awarded $115k (around $2 million in 2020 dollars).  The basic idea here was that the company owned the imagery of the jovial colored woman caricature, but then Gardella made her come to life in a particular way.  The company’s advertising campaign then hired an actor of “inferior quality” who appeared to imitate Gardella’s claimed style of imitating.

On appeal, the court found that both Gardella and Quaker (the new owner of Aunt Jemima flour) had legal rights to control the image.  However, the reversed the judgment for Gardella — finding lack of proof of “deception of the public.”

The appellee Aunt Jemima and the ‘pancake‘ Aunt Jemima had numerous features in common. Appellee in adopting the character of a singing colored woman, together with the name ‘Aunt Jemima,‘ rendered inevitable some degree of similarity. It must be assumed that the public was accustomed to, and was cognizant of, the common features. That identification sufficed which clarified and emphasized the fictitious character of the ‘pancake‘ Aunt Jemima. An examination of the broadcast script reveals that whenever Aunt Jemima was referred to or introduced it was always in the form of advertising pancakes and syrup.

Gardella v. Log Cabin Products Co., 89 F.2d 891 (2d Cir. 1937).  I’m sure it is not lost on the reader that the two entities are fighting over who gets property rights over the cultural appropriation. “Aunt Jemima represented warmth and joy, and the fact that she was really white doubtless helped to win over those with racial antagonisms” Slide, The Encyclopedia of Vaudeville. In trademark law, ‘Aunt Jemima’ has also become to be known as an arbitrary or fanciful  mark – similar to ‘Kodak.’  In his book, M.M. Manring tells a different story – how the name and imagery were particularly designed to sell to whites who could not afford a household servant. M.M. Manring, Slave in a Box: The Strange Career of Aunt Jemima (UVA Press 1998) (chapter 1 available here).

Some of these decisions — especially Kirkland — remind me of how the judges appear to often have a jurisprudential switch. When a judge feels a an innate understanding of an issue — having already lived with the issue — the court is quick to judge. “No evidence … is necessary.”  In Kirkland & Blair the judge automatically knew that the consuming public would be confused by the use of two black-skinned images on competing products.  In my experience, as the issues become more complex – or as the court allows-in complexity – courts then become more willing to listen to additional evidence.

We certainly see this in patent law as well and some doctrines seem almost designed to be open to quick gut-judgments – such as patent eligibility – while others require a more methodological analysis of proofs – such as anticipation and (typically) obviousness.

The Westlaw database includes 350+ cases that reference “Aunt Jemima” since 1910. The chart below shows a histogram of these decisions. The newer cases are primarily employment discrimination cases that involve identifying a black or brown employee as an “Aunt Jemima” or pasting images of Aunt Jemima in the person’s work area.  Older cases are trademark (including a number citing the Rigney decision). 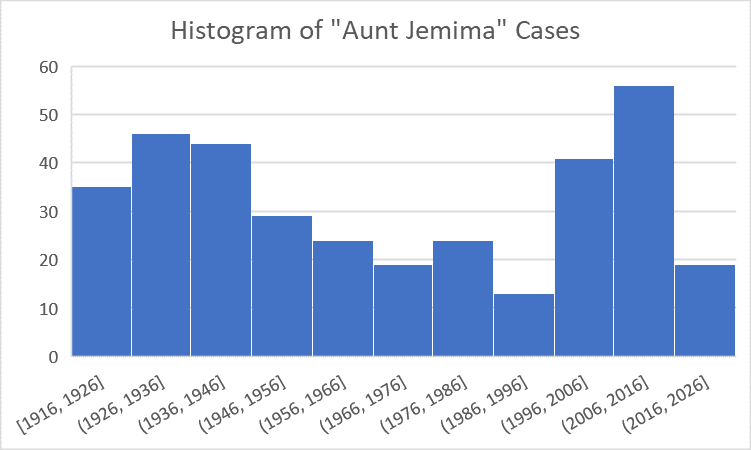 10 thoughts on “One more on Aunt Jemima”