July 4, 1776, the “united States of America” met and declared independence from Britain and its King who had worked to establish “an absolute Tyranny” over the thirteen colonies.  Ever since, in the American mindset, tyranny demands revolution. “[W]henever any Form of Government becomes destructive of these ends, it is the Right of the People to alter or to abolish it, and to institute new Government.” 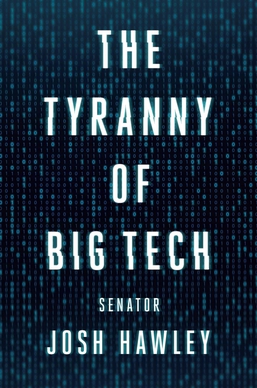 My Missouri Sen. Josh Hawley grabs hold of this rhetoric in his new book – Tyranny of Big Tech.  Although Hawley’s publishing contract has been publicly cancelled, I’m sure he’ll find a way to publish it — even if it means he receives less money.  Hawley is way-off the mark.  As a person-in-power, he should have taken care to avoid revolutionary rhetoric for what is really a regulatory issue.  He unfortunately raised tensions, raised them again, and then again.

BUT, the power of big tech is real. This week, Trump’s soap-box (twitter account) was been removed; Stripe stopped processing his donations; Parler was removed from major app stores (Google + Apple) and its web host denied (Amazon AWS) until the company complies with moderation policies. Parler says it won’t comply.  You could imagine the owners of the internet backbone (Tier-1 ISPs) and as direct-to-customer-providers blocking communications from these services as well.  This is the most public flexing of US internet might, but lower-key actions have been going on for years — especially toward traditional vices such as sex-workers, pornography, gambling, and marijuana sales.  You could imagine next-level ramping up of tensions with pro-Trump shipping companies refusing to deliver for these companies.  Ahh, but the legality of all of this may depend upon regulatory controls on speech and on common carriers.

Hawley has been calling these recent actions a violation of free speech rights.  That is obviously wrong when it comes to First Amendment protections. The First Amendment does not require private companies publish Donald Trump’s speech or provide internet service Parler.  That said, for years liberals have been calling for network neutrality regulations that would go a long way toward this end.

Free speech law does not begin-and-end with the U.S. Constitution.  Rather, our internet has been structured as a reaction to common law principles later adapted by Congress.  Those rules and regulations can change, and likely will change over the next four years.

For now though, I’m just looking for our democracy to survive the next 9 days. Good luck everyone!