Chudik filed his patent application back in 2006. After receiving a final rejection back in 2010, Chudik filed a request for continued examination (RCE).  At that point the examiner withdrew the prior rejection, but then rejected the claims on an alternative ground.  Chukik appealed to the PTAB, but the Board did not get a chance to hear the case. Rather, the examiner again withdrew their rejection and re-opened prosecution with a new alternative ground for rejection.  That appeal-withdraw-new-ground process happened again.  Then it happened again.

Now we’re up to 2017.  Chudik had filed four appeals in the same case but the PTAB with the examiner backing-down each time.  Finally, on the fourth go-round, the examiner issued a notice of allowance after withdrawing the rejection. His patent: US 9,968,459.  Good job Chudik. The patent covers a medical device used in shoulder surgery.  This is the type of invention that – if its use becomes widespread – will use-up the whole 20-year patent term. 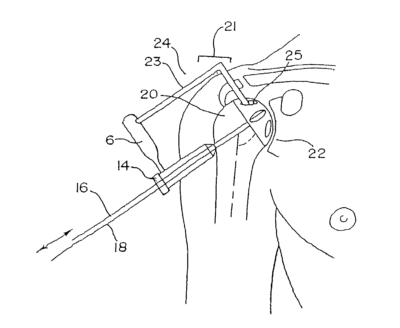 Patent term — You know that a patentee gets a term of 20-years from the application priority filing date (not counting provisional and foreign priority). BUT, Congress allowed for patent term adjustment in situations involving delays in prosecution.  The statute, 35 U.S.C. § 154(b), is a bit complicated and poorly written.  In general, a patentee gets extra time whenever it takes the USPTO more than three-years to issue the patent. (B-delay).  However, under the statute, the 3-year delay counter is cut-short by an RCE filing.  Thus, Chudik’s RCE filing cuts-off that form of adjustment.  The statute also provides for A-delay bonuses associated with specific deadlines. This includes issuing a first OA within 14 months and responding to most responsive-filings by the applicant within 4 months.  Overall, out of the 11 1/2 years (4246 days) in prosecution, the PTO awarded 5 1/2 years (2066 days) of PTA to the end of the patent term based upon A- and B-delays.

This appeal focuses on what is known as C-delay. 35 U.S.C. § 154(b)(1)(C). This is time added to the patent term due to appellate review by the PTAB (inter alia).  C-delay has an important caveat — it only applies in cases where “the patent was issued under a decision in the review reversing an adverse determination of patentability.” Id.  Here, although Chudik appealed to the Board four times, the examiner withdrew the rejection each time.  The PTO issued regulations regarding the statute that particularly state that an applicant “is not entitled to [C-delay] patent term adjustment for the reopening of prosecution” by the examiner.

Now, the A-Delay already accounts for some of the delay because the examiner has a bit of a deadline to withdraw the rejection.  However, Chudik found that repeated appeals cost him about 2 years (655 days) of additional patent term not accounted-for by the A-Delay provision.

On appeal, Chudik argued that (1) the appellate process should be deemed to begin when he files the notice-of-appeal; and (2) an examiner’s decision to withdraw a rejection should be interpreted under the statute as the Board “reversing an adverse determination of patentability” because it has the same impact. Chudik filed a civil action on the issue and lost.

On appeal here, the Federal Circuit did not determine the particular standard-of-review to apply to the agency action — finding that it didn’t matter because the PTO’s interpretation was also the best interpretation.

In particular, the court held that Chudik’s proposed interpretation “is, if not linguistically impossible, strained.” The provision:

[PTA provided for] (iii) appellate review by the Patent Trial and Appeal Board or by a Federal court in a case in which the patent was issued under a decision in the review reversing an adverse determination of patentability.

You decide – does this provision allow for an examiner’s withdraw of a rejection?  The court explained that a “review reversing” something requires action by the appellate tribunal (here, the PTAB).  Without a PTAB decision, the C-Delay had no effect.

In conclusion, the appellate panel offered a warning to applicants regarding RCEs:

119 thoughts on “Patent Term Adjustment: What Happens When Examiner Withdraws Case from Appeal?”