This pending petition for certiorari involves a trademark registration dispute between Kaszuba (HOLLYWOOD BEER) and Hollywood Vodka LLC (HOLLYWOOD VODKA).  Kaszuba first registered his mark (albeit on the Secondary Register).  Later, HVL was denied registration — in part because of the existence of the Kaszuba’s mark.  HLV then filed a cancellation proceeding before the Trademark Trial & Appeal Board (TTAB).  After a drawn-out process, the Board eventually sided with HLV—entering judgment against Kaszuba as a sanction for discovery violations.

I’ll note that neither of these brands stand-up to the more popular Hollywood Brewing Co. (Hollywood, FL).

The second question is where plain error lies.  In its decision, the Federal Circuit allowed the U.S. Gov’t to intervene in the case based upon Section 143 (Hollywood Vodka did not participate in the appeal).  That section of the Patent Act does provide for intervention, but only specifically for appeals from the PTAB, and only in derivation, IPR, or post-grant review proceedings.

The Director shall have the right to intervene in an appeal from a decision entered by the Patent Trial and Appeal Board in a derivation proceeding under section 135 or in an inter partes or post-grant review under chapter 31 or 32.

Section 143 obviously does not provide authority for the PTO to intervene in an appeal from the TTAB.  However, that may be harmless error as the Federal Circuit has previously allowed intervention in trademark cases. See In re Bose Corp., 580 F.3d 1240, 1243 (Fed. Cir. 2009) (“Because the original appellee Hexawave did not appear, the PTO moved, and the court granted leave to the Director, to participate as the appellee.”).

Note there are lots of brewing Hollywood TM disputes.  Below is a screenshot of a few TM cases at the PTO. 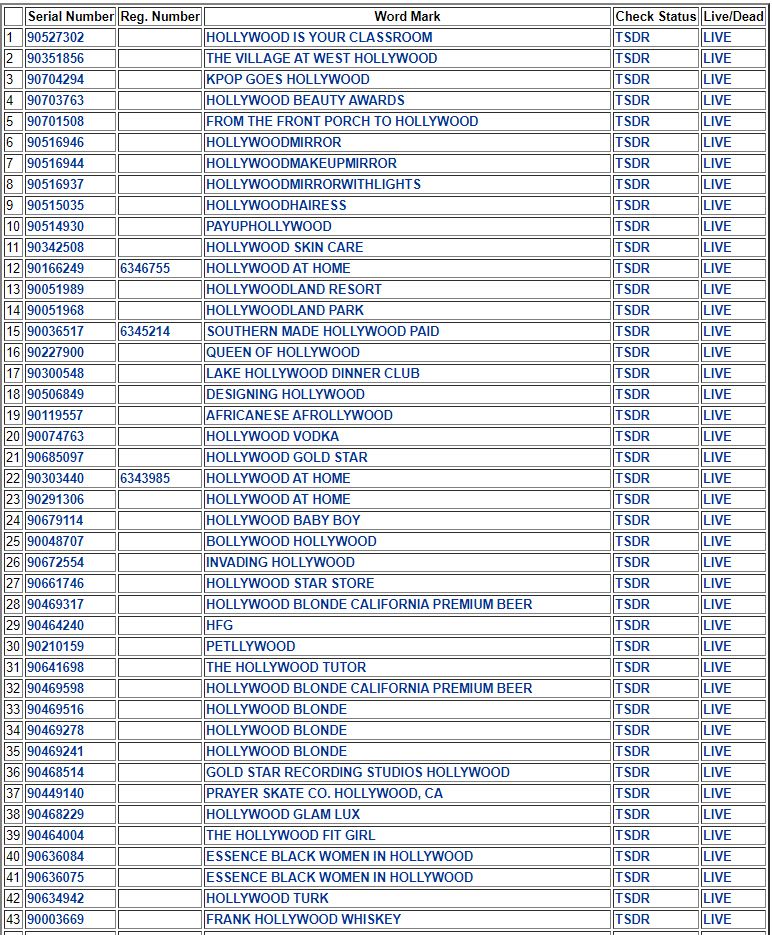 7 thoughts on “Hollywood, Alcohol, and Trademarks”