Companies who play corporate games creating and shifting shell companies sometimes face serious consequences when painted into a corner.   In Cirba, Inc. (DBA Densify) and Cirba IP v. VMWare (D. Del. 2020), a jury sided with the patentee Cirba Inc. and awarded $235 million in damages.  That verdict though has been vacated because Cirba Inc.’s subsidiary Cirba IP actually owns the patent rights.  According to the filings, the transfer to Cirba IP was done for “uncontroversial tax reasons.”

Although the jury awarded the money, Judge Leonard P. Stark did not enter judgment for the millions. Rather, Judge Stark found that Cirba Inc. (“INC”) did not actually have rights to enforce the patent and thus dismissed the case for lack of Article III standing.  According to Stark, INC had transferred rights to its wholly owned subsidiary Cirba IP (“IP”).  And, although IP was a co-plaintiff Judge Stark ordered a new trial — finding that the presence of INC so materially changed the trial that “it is quite probably that the outcome would … have been different.”  Basically, the theme of INC’s case was about competition against the much larger VMWare, but IP is only a patent holder.  Thus, all is not lost for Cirba, but juries are quite unpredictable. 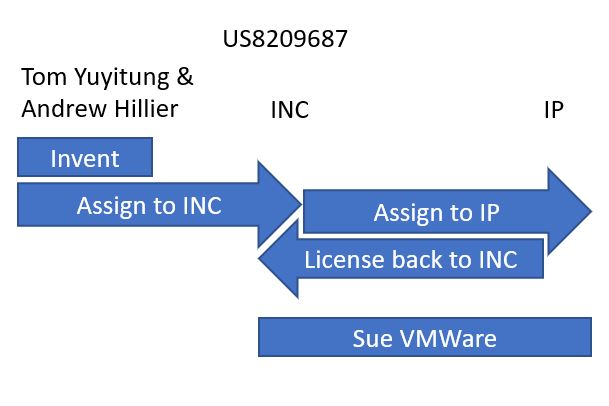 A timeline of events is shown above, and one basic question for standing is whether that license-back included enough grit to give INC standing.

The new trial order is not a final judgment — the case is still ongoing.  That means that there is no right to appeal the case immediately.  However, Cirba has petitioned the Federal Circuit for writ of mandamus, arguing that the dismissal on standing was improper. The petition particularly focuses on the Supreme Court’s Lexmark decision and the Federal Circuit’s two subsequent decisions of Lone Star and Schwendimann.  In particular, the plaintiff argues that under those decisions, the patent ownership is not a jurisdictional/standing question. “[D]ecisions treating the prerequisites of the Patent Act as jurisdictional were wrong.” Schwendimann.  “Whether a party possesses all substantial rights in a patent does not implicate standing or subject-matter jurisdiction.” Lone Star.