What is the legal result regarding the claims:

In an Inter Partes Review (IPR), the PTAB generally focuses on whether or not the claims have been proven unpatentable.  If the patentee, the PTAB has a general approach of issuing a declaratory order that the claims “have not been shown, by a preponderance of the evidence, to be unpatentable.”  The evidentiary-and-burden caveats from the PTAB leave substantial wiggle room about whether the claims are valid or invalid in any more abstract sense.  We would be better off if the PTAB was able to make a positive statement — concluding that the claims are patentable.

The AIA calls for the Board to “issue a final written decision with respect to the  patentability of any patent claim challenged by the petitioner.”  35 U.S.C. § 318(a).  This portion of the statute suggests to me that the Board’s declaration should be a  more direct decision about patentability.  That interpretation is bolstered by  § 318(b) which suggest that every challenged claim will have either been “determined to be unpatentable” or “determined to be patentable.”

Section 318(b) referred to above particularly calls upon the USPTO director to receive the Board’s decision and then issue an Inter Partes Review Certificate “canceling any claim of the patent finally determined to be unpatentable, confirming any claim of the patent determined to be patentable, and incorporating in the patent by operation of the certificate any new or amended claim determined to be patentable.”  Following the language of the statute, the PTO Director has a practice stating that claims maintained by the PTAB “are found patentable.”  Thus, the Official Certificate appears to makes a claim about patentability (as required by the statute) rather than merely about the level of evidence provided. 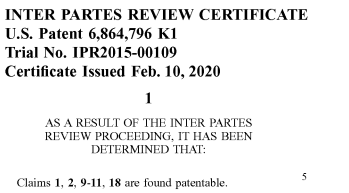 In some ways, this is all semantics, but I would suggest that can matter quite a lot to a later tribunal to see a positive statement of patentability as opposed to a caveat filled statement regarding a claim not-proven-unpatentable. At the same time, asking the PTAB to positively rule on patentability suggests opening-the-door to broader patentability questions.

24 thoughts on “Found Patentable -or- Not Proven Unpatentable”