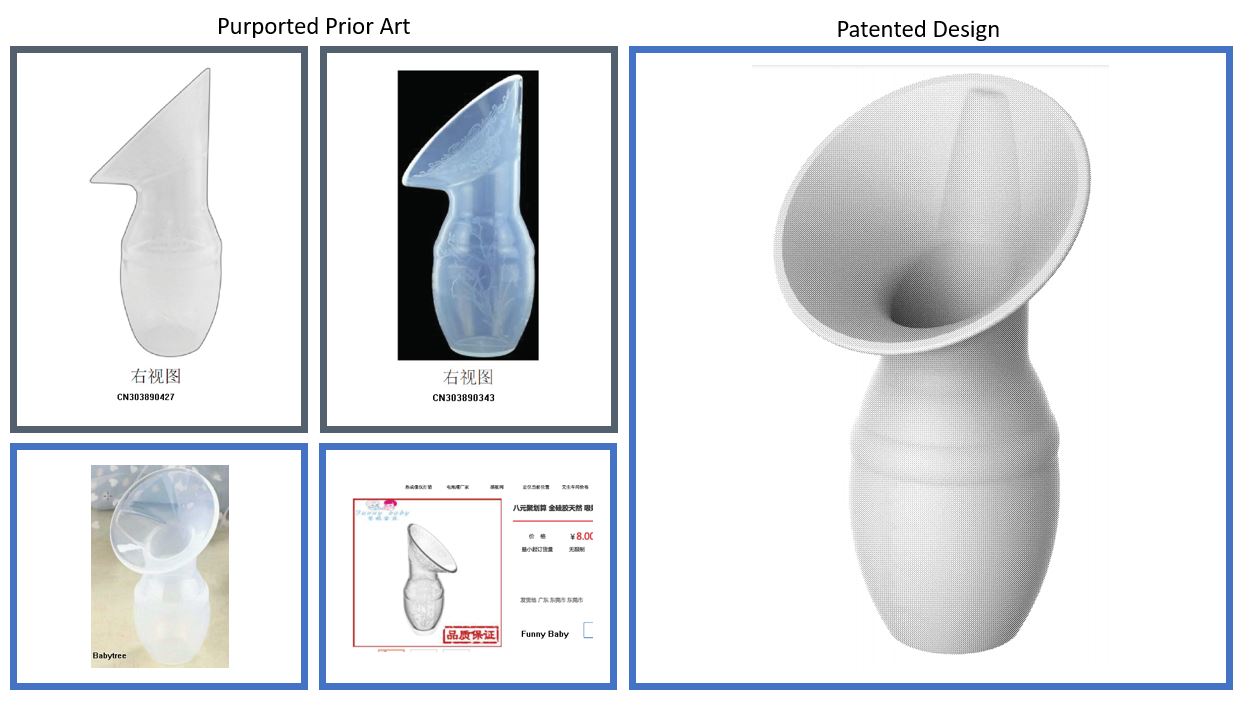 Folks continue to file anonymous ex parte reexaminations.  Michael Piper of Conley Rose filed this one on behalf of an anonymous party challenging Zhang’s U.S. Design Patent No. D810,925 (“breast pump”).   The reexamination examiner agreed with the challenge and issued a final rejection that the claimed design was anticipated by four different prior art references.  Note that design patent anticipation asks whether the design to be patented is “substantially the same” as the prior art in the eyes of an ordinary observer.

Two designs are substantially the same if their resemblance is deceptive to the extent that it would induce an ordinary observer, giving such attention as a purchaser usually gives, to purchase an article having one design supposing it to be the other.

Not Prior Art: On appeal, the PTAB has reversed — finding that cited references are not prior art at all.

First to Disclose: Two of the references were Chinese Design Registrations filed and published a couple of months before Zhang’s filing date.  Prior to that date, but still within one-year, Zhang had already licensed the design and licensed pumps embodying the patented design were on sale in China. The timing of this prior public disclosure was just right to save the day under Section 102(b)(1)(B).

(b)(1) A disclosure made 1 year or less before the effective filing date of a claimed invention shall not be prior art to the claimed invention under subsection (a)(1) if—(B) the subject matter disclosed had, before such disclosure, been publicly disclosed by the inventor … or another who obtained the subject matter disclosed directly or indirectly from the inventor or a joint inventor.

Zhang apparently did not make this argument until the appeal, and, the examiner withdrew his rejection after receiving the declaration with supporting evidence.

Here, an anonymous third party, through counsel, provided the USPTO with copies of two webpages in a foreign language … each paired with an uncertified English translation. Both documents and translations were submitted by a third party requester in a very unclear, grainy or pixelated manner and the text and details over the figures are very difficult to discern.

The submitted material do include printed dates, but the PTAB found them unclear and insufficient without any corroborating evidence regarding context or accuracy. Further, no evidence was submitted showing that the sites were publicly accessible as of those dates, and the pages are no longer available on the internet.

There is simply no explanation or verification of the source, date or accessibility of the information presented on these documents. While we can put some weight in the duty of a signatory of a registered patent attorney in accordance with 37 C.F.R. § 11.18 that statements of fact are “believed to be true,” we simply cannot find the evidence sufficient to establish the documents as prior art.