The patent system has seen tremendous change over the past decade.  A large part of the transformation stemmed from the Leahy-Smith America Invents Act of 2011 that was enacted ten years ago in September 2011.  Earlier this week, I conducted a quick survey of Patently-O readers asking for their thoughts on the impact of the AIA, which has repeatedly been heralded as the largest change to the U.S. patent system since the Patent Act of 1952.  We have about 600 responses.

Most of the survey question used a modified Likert Scale and asked about the importance of various statutory changes found within the AIA.  In order to run some statistics, I transformed the qualitative scale into a linear quantitative scale ranging from 1 (not important) to 5 (very important).

It is not surprising that creation of the Inter Partes Review (IPR) system is seen as the largest change to the system. IPRs have been used to cancel the claims of thousands of patents as obvious — only a small percentage of those would have been found obvious by a jury.   Although almost everyone agreed that IPRs were most important, Patent Attorneys and Patent Agents differed somewhat on other issues, with agents seeing changes to Section 102 as relatively more important to other issues. This included eliminating the date of invention as relevant to patentability and narrowing the pre-filing grace period.  On the other hand, Patent Attorneys gave more weight to PGR proceedings. Patent Office employees were the only ones to say that the addition of satellite offices was important. 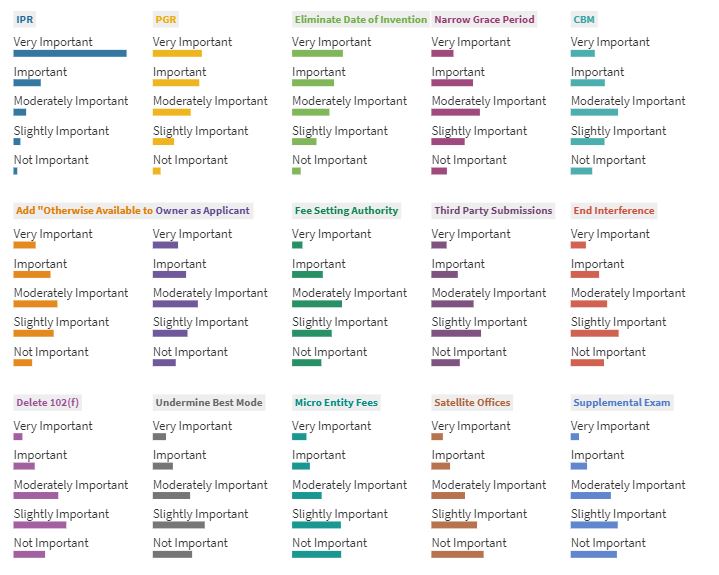 The survey included an open-ended response block asking “What else do you have to say about the impact of the AIA?” About 1/3 of responses included these additional thoughts.  My survey tool (Qualtrics) used semantic analysis on these responses and reports that the sentiment expressed was most often generally either “negative” or “very negative.”   (65% Negative or Very Negative; 25% Mixed; 10% Positive or Very Positive).

Some comments focused on the AIA coupled with Eligibility Decisions have “decimated the patent system”; “Devalued IP”; and “greatly reduced the value of U.S. patents” all “to the benefit of large enterprises.” ” A real mess.”

Folks also mentioned the prior user defense; false marking; reducing your own secret prior art; classification system; The new declaration/oath filings was quite costly for applicants.  I’ll publish a more thorough report in the coming days.