This is the final post in a series about our new research project on mandamus practice in the federal courts of appeals generally and the Federal Circuit’s peculiar use of mandamus in patent cases specifically.  The two previous posts can be found here and here.

Even if a plaintiff has filed its case in a federal court in which personal jurisdiction and venue exist, 28 U.S.C. § 1404(a) permits the judge to transfer the case to another district “[f]or the convenience of parties and witnesses, in the interest of justice.” Transfer motions under § 1404(a) are a common tactic in patent litigation, particularly for California-based tech companies sued in the Eastern and Western Districts of Texas. When defendants lose those motions—as they often do in Texas—they frequently seek immediate review in the Federal Circuit by petitioning for a writ of mandamus.

Despite the writ’s extraordinary nature, our study shows that it’s a remarkably ordinary form of relief in the Federal Circuit—at least in cases involving denials of transfer by the Eastern or Western District of Texas. The first time the Federal Circuit ever granted mandamus to overturn a transfer denial was in 2008, in a case called In re TS Tech, which arose from the Eastern District of Texas. Since that time, the Federal Circuit has decided 105 mandamus petitions seeking to overturn a denial of transfer under § 1404(a). It has granted 34 of them, for a grant rate of 32.4%. Pretty high for an extraordinary writ that’s supposed to issue only if the lower court’s decision was a “clear abuse of discretion” that “produced a patently erroneous result,” as the Federal Circuit wrote in a 2009 decision, In re Genentech. (Cleaned up.) The figure below shows the outcomes of decisions on mandamus petitions challenging § 1404(a) transfer denials decided by the Federal Circuit each year since 2008.

Figure 1: Mandamus decisions by the Federal Circuit involving challenges to 1404(a) decisions 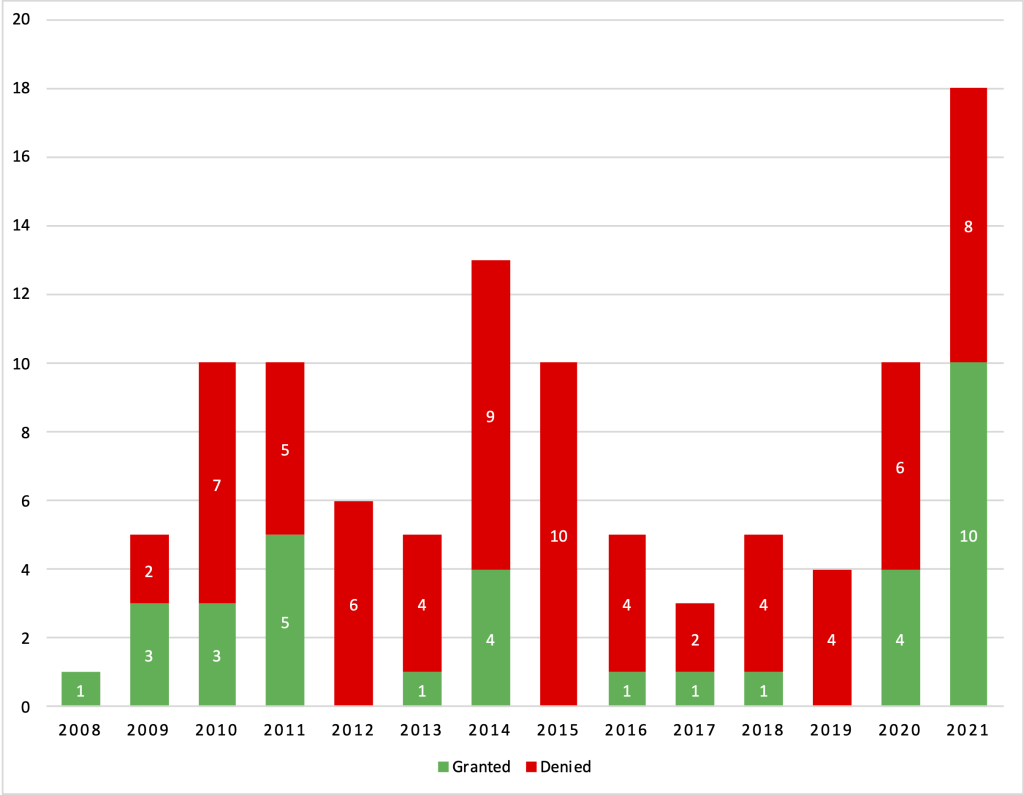 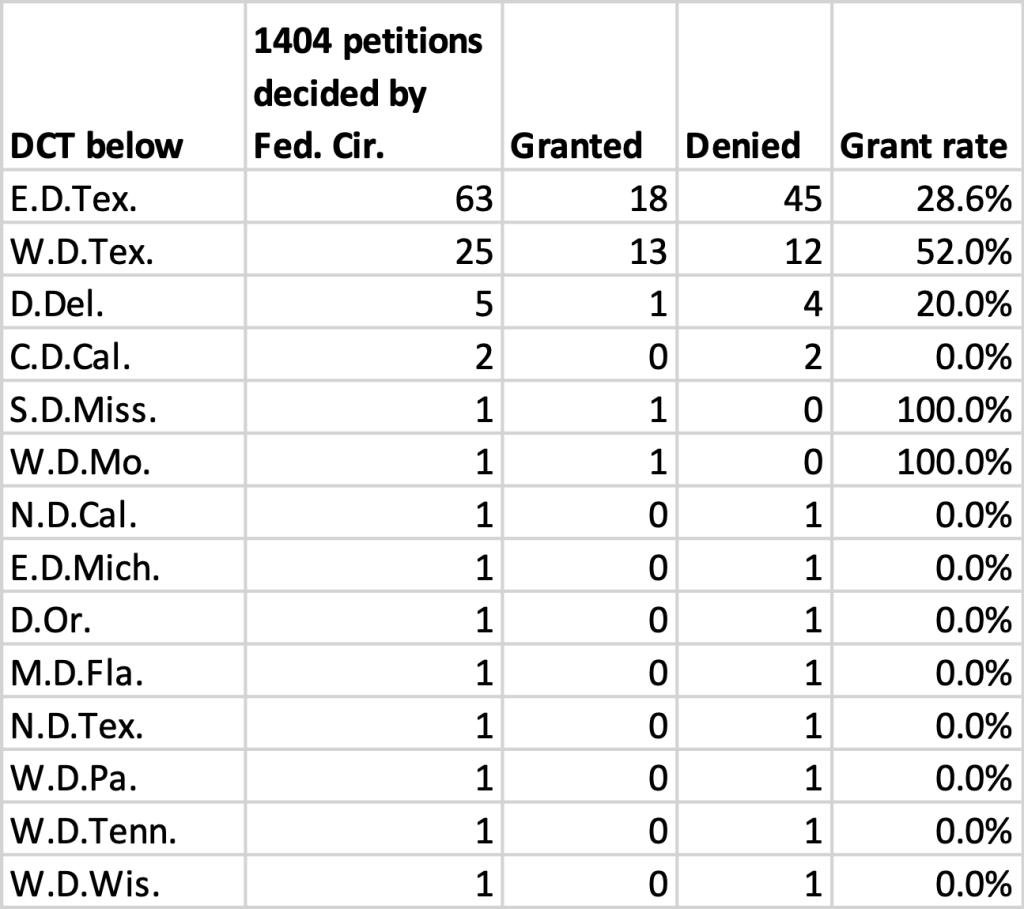 The recent explosion of patent cases in the Western District of Texas is fueled entirely by Judge Alan Albright who, as Jonas and I have written, has actively encouraged patentees to file infringement suits in his Waco courtroom and has adopted numerous procedural practices that are attractive to forum-shopping patentees—to say nothing of the fact that the Western District’s lack of random case assignment allows patentees to know, with absolute certainty, that Judge Albright will hear their case.

The Federal Circuit is exceptional among the federal courts of appeals in using an extraordinary writ to engage in what is essentially interlocutory error correction. On first glance, we might view this as a flaw with the Federal Circuit: the specialized court is too zealously exercising its final authority over patent law and wasting party and judicial resources by policing discretionary district court rulings on an issue that’s entirely separate from the merits of the case. But Judge Albright’s aggressive efforts to attract patent cases to Waco—and his seeming disregard of appellate precedent on transfer of venue—have forced the Federal Circuit’s hand. Predictable judge assignments have encouraged what is essentially a race to the bottom among district judges who want to attract patent infringement plaintiffs. The mechanism for competition is procedural rules—and procedural rulings—that are extremely favorable to plaintiffs. And so the stakes over transfer of venue decisions are unusually high in patent cases. This suggests that the writ of mandamus—a procedural mechanism from the dustiest corner of civil procedure—will play a crucial role in determining the future of the U.S. patent system.

60 thoughts on “Extraordinary Writ or Ordinary Remedy? Mandamus at the Federal Circuit – Part 3”