We do a moot court competition every year in my basic patent law course at the University of Missouri.  The students just submitted opening briefs. Responsive briefs are due over the weekend, and oral arguments will be held next week on the 16th and 17th of November. It is a fun capstone for the course, although it is some amount of work for the students.  Folks at McKool Smith have provided some funding and so the winner receives a nice $1,000 check.

[I could use a few more judges — you can sign-up via doodle; or contact my Teaching Assistant Homayoon Rafatijo]

This year’s case is based directly on Judge Gilstrap’s recent patent eligibility decision in  Mad Dogg Athletics v. Peloton Interactive (E.D. Tex. Sept. 15, 2021).   Mad Dogg was the originator of the indoor Spinning market back in the early 1990s (it owns the registered TM on SPINNING and SPINNER).

In the 2000s Mad Dogg entered a new marked for video-led home-indoor cycling and also created its new spinning bicycle that incorporated a touch-screen display and controller.  The patents at issue here cover this new development (2005 priority filing date; 9,694,240 and 10,137,328).   In 2014, Peloton released its own competitor product and has built-up a multi-billion-dollar product line. 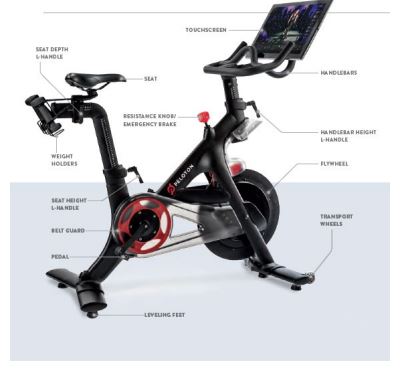 In December 2020, Mad Dogg sued in E.D. Tex.  Peloton responded with a 12(b)(6) motion to dismiss for failure to state a claim — arguing that the claimed inventions were improperly directed toward an abstract idea.  And, the district court agreed – dismissing the case.  The court particularly concluded that the claims are directed to the abstract idea of “providing instruction for an exercise bike class.” Regarding Alice Step 2, the court did not actually determine whether the claims recite a sufficient inventive concept, but still dismissed the case — holding that the plaintiff did not plead “enough facts … to avoid a Rule 12(b)(6) dismissal.”

In the real case, Judge Gilstrap dismissed without prejudice–providing Mad Dogg with the opportunity to refile a complaint that asserting additional facts regarding Alice Step 2.  However, I modified the order for our moot court so that the dismissal is with prejudice, thus setting up the appeal. [Read the Case File Here].  In order to facilitate our quick timeline within class, I announced the issues by fiat and required both appellants and appellees to file their briefs simultaneously.

The parties have agreed to limit the appeal to two questions:

As you think about this case, consider claim 1 of the ‘240 patent:

a frame that is configured to allow a rider to ride in sitting and standing positions;

a direct drive mechanism that couples a pedal assembly and a flywheel and that facilitates a smooth transition between sitting and standing positions;

a set of handlebars that is coupled to the frame and that provides the rider with at least one hand position;

a mechanism that provides resistance to the flywheel and that is manually adjustable by the rider to vary the pedaling resistance;

a computer that is coupled to the stationary bike, that is configured to connect with the internet or other computer network to access a collection of exercise routines, wherein the exercise routines include instructions regarding cadence, pedaling resistance, and riding positions including sitting and standing positions, and that stores power exerted by the rider;

a display that is coupled to the computer, that displays an exercise routine from the collection of exercise routines so that the rider is provided with instructions for the rider to manually adjust pedaling resistance, and instructions for the rider to vary cadence and riding positions including sitting and standing positions, thereby simulating an instructor-led exercise class, and that displays power exerted by the rider; and

What do you think of this case? Any thoughts on how you might argue the appeal? Thanks!  Crouch.

74 thoughts on “Moot Court: Aka Spinning Class at the Law School”