In the past 50 years, the Supreme Court has decided about 70 patent cases (depending upon how you count).  One of the least cited is the 1976 case of Dann v. Johnston, 425 U.S. 219, 225 (1976). The case was set-up as a showdown on questions of patent eligibility in the “highly esoteric field of computer technology.”  Id. But, in the end, the court focused on the more mundane question of obviousness — a doctrine it continued to refer to as “invention.”

Johnston was seeking to patent a “record-keeping machine system for financial accounts.”  Basically, this was software installed on a bank-owned IBM 1400 that allowed its customers to categorize their income and expenses for better reporting. 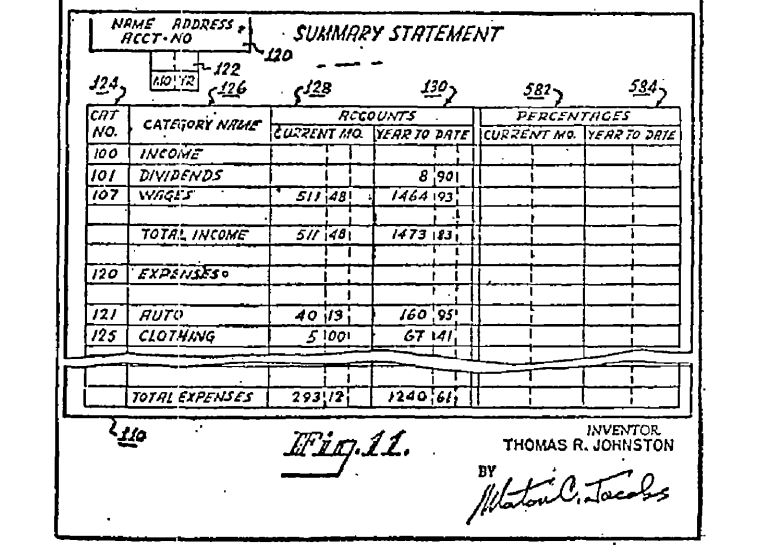 The Patent Office rejected the claims, but the CCPA revived them. That 3-to-2 decision included a narrow interpretation of Gottshalk v. Benson, 409 U.S. 63 (1972), concluding that the case only applied to process or method claims.

The issue considered by the Supreme Court in Benson was a narrow one, namely, is a formula for converting binary coded decimal numerals into pure binary numerals by a series of mathematical calculations a patentable process?

In re Johnston, 502 F.2d 765 (C.C.P.A. 1974). Since Johnston was patenting a system, Benson was deemed irrelevant by the CCPA majority.  Judge Rich wrote in dissent, and argued that the invention was barred under Benson. To be clear, Judge Rich was not a fan of Benson, but he took the Court’s decision as law, albeit warty.  He explained:

As the author of the opinion of this court in Benson, which was wholly reversed, I have not been persuaded by anything the Supreme Court said that we made a “wrong” decision and I therefore do not agree with the Supreme Court’s decision. But that is entirely beside the point. Under our judicial system, it is the duty of a judge of a lower court to try to follow in spirit decisions of the Supreme Court— that is to say, their ‘thrust.’

Id. (Judge Rich in dissent).   Still, the big question was what to take-away from Benson and Judge Rich suggested that the focus should not be limited by the Supreme Court’s wording.

I am probably as much – if not more – confused by the wording of the Benson opinion as many others. What the Court did in its decision … contains a message that is loud and clear. If those claims are not to patentable subject matter, neither, in my view, are the claims here, regardless of difference in form.

Id.  Judge Markey also wrote a dissent that foreshadowed the eventual Supreme Court decision. Markey argued that Johnston’s claims were invalid based upon the prior art and that the eligibility questions should be avoided.

After losing before the CCPA, the government then petitioned for Supreme Court review in the name of Marshall Dann, who was President Nixon’s Commissioner of Patents.  The petition includes three questions:

Johnston’s attorney Morton Jacobs drafted the patent application and also argued the case all the way to the Supreme Court (eventually losing).  The responsive brief recategorized the questions in an interesting way:

The unanimous Supreme Court decision was authored by Justice Thurgood Marshall and expressly avoided the questions of patentability of software or computer programs.  Rather, the court found the claims obvious.

The opinion began with a recitation of the doctrine:

As a judicial test, “invention” – i.e., “an exercise of the inventive faculty” – has long been regarded as an absolute prerequisite to patentability. However, it was only in 1952 that Congress, in the interest of “uniformity and definiteness,” articulated the requirement in a statute, framing it as a requirement of “nonobviousness.” . . .

This Court treated the scope of § 103 in detail in Graham v. John Deere Co., 383 U.S. 1 (1966). There, we held that § 103 “was not intended by Congress to change the general level of patentable invention,” but was meant “merely as a codification of judicial precedents… with congressional directions that inquiries into the obviousness of the subject matter sought to be patented are a prerequisite to patentability.” While recognizing the inevitability of difficulty in making the determination in some cases, we also set out in Graham, the central factors relevant to any inquiry into obviousness: “the scope and content of the prior art,” the “differences between the prior art and the claims at issue,” and “the level of ordinary skill in the pertinent art.”

Dann v. Johnston, 425 U.S. 219, 226 (1976). In analyzing the claims, the court concluded that it need not find a prior art equivalent to each and every claim limitation.  Rather, the focus of the test is the significance of the differences to one of skill in the art.

[I]t must be remembered that the “obviousness” test of Section 103 is not one which turns on whether an invention is equivalent to some element in the prior art but rather whether the difference between the prior art and the subject matter in question “is a difference sufficient to render the claimed subject matter unobvious to one skilled in the applicable art. . . .”

Id. (quoting Judge Markey’s dissent in Johnston).  It is not entirely clear what point the court was making in noting that the referenced prior art were “closely analogous” but not “equivalent.”

Of note, the court’s statement here of the foundations for obviousness from Graham did not include includes secondary indicia such as commercial success.  Later in the opinion, Justice Marshall added a footnote recognizing that their potential relevance in an obviousness analysis.  However, the opinion also reiterated the statement from the checkout-counter case – Great Atlantic & Pacific Tea Co. v. Supermarket Equipment Corp., 340 U.S. 147 (1950) – that “commercial success without invention will not make patentability.”  Justice Jackson’s concluding statement in that case may be equally applicable to Johnston: [The patentee had] “a good idea, but scores of progressive ideas in business are not patentable, and we conclude on the findings below that this one was not.” Id.

In the end, Dann v. Johnston is something of a dud, a sloppy reverb of Graham. The key takeaways going forward: