Although patents are a form of private property, they are also expressly a tool of public policy.  When a private patent lawsuit of interest reaches the Supreme Court,  the Court regularly turns to the President’s administration for its views on how a decision may impact patent law and innovation writ large. That request for an amicus brief from the government is termed a CVSG – Call for the Views of the Solicitor General.   One problem with CVSGs is that they typically add several months to the certiorari process because the DOJ spends substantial time collecting input from various government branches and outside interests before drafting and filing its brief.  In patent cases, a Gov’t amicus brief is often the most important at the certiorari stage — or at least the most predictive of the outcome.

We are currently waiting CVSG amicus briefs in two patent cases pending before the Supreme Court:

Of these, the Personal Web request is fairly recent, but American Axle has been spinning since May 3, 2021 – just over 8 months.

To get a sense of timing, I looked back at the past 30 CVSG requests – this stretches back to 2019 and calculated the number of months the USDOJ took to file its brief.  The median timing was 5 months, and all the briefs were submitted in less than 9 months.  What this means is that the DOJ still has a few more weeks to complete its task and still be within these historic guideposts.

I truly do not know what the DOJ is going to say in its American Axle brief.  Back in 2019, the Solicitor General filed a powerful brief in Hikma v. Vanda arguing that Mayo and Alice led to substantial confusion, especially when attempting to reconcile prior cases such as Diehr.  But, the Gov’t brief in Hikma was filed by President Trump’s SG (Noel Francisco) and the big question is whether President Biden’s Solicitor Elizabeth Prelogar (and the Biden Admin generally) will follow the same course.  Although the top-signatories have changed, the folks actually researching and writing the brief are largely the same, including Thomas Krause who was PTO Solicitor and is now the PTO’s Acting GC.  In addition, Malcolm Stewart remains the Deputy SG at the Department of Justice (as do others). 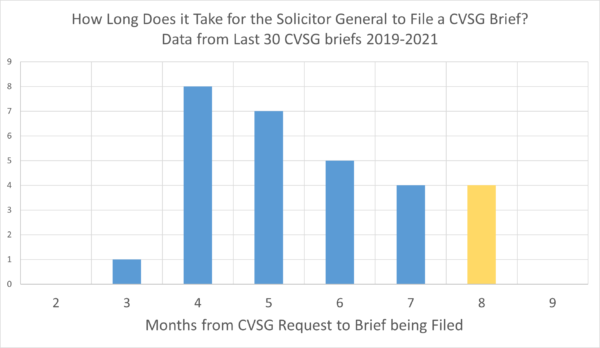