In a new opinion the court asked and answerd an interesting question: What if most on-point prior art was accidentally created due to a typographical error? In LG Electronics, Inc. v. ImmerVision, Inc., — F.4th — (Fed. Cir. 2022), the Court sided with the patentee in holding that a person of skill in the art would have “disregarded or corrected” the  error rather than relying on the error as the foundation of an inventive project.  A key to the analysis was a finding that the error would have been apparent to someone of skill in the art.  See In re Yale, 434 F.2d 666 (CCPA 1970).

ImmerVision’s patent claims an improved method for panoramic images.  The basic idea is to use a non-linear objective lens that captured and then digitally mapped onto a linear pixel grid. The claims require that the lens compress the image at its center and edges and expands intermediate zones.  You can compare the prior art linear objective lens results (Fig. 4A) with those of the proposed panorama lens (Fig 7A). 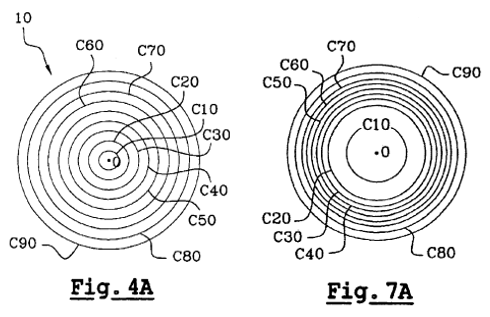 Because of lens curvature, the center and edges of a super-wide-angle-lens are typically produce lower image quality. The approach here improves the quality of those areas but at the same time creates odd distortions in the image that then need to be corrected using digital image processing.   There are other solutions that would work as well. One example would be higher sensor density in these particular areas.

Lots of smartphones now have multiple lenses, including panorama lenses.  ImmerVision sued LG (and others) for patent infringement and LG responded with two IPR petitions. The PTAB instituted the IPR here, but eventually concluded that LG had failed to prove that the claims should be cancelled. On appeal, the Federal Circuit has affirmed.  Judge Stoll penned the majority opinion joined by Judge Cunningham.  Judge Newman wrote in partial dissent — arguing that the error in the prior art was not an obvious-enough error.

Typo in the Prior Art: The key prior art (Tada) included one table of aspherical data that appeared to show a non-linear lens similar to ImmerVision’s.  The problem — those figures do not match-up with other descriptions of the embodiment in the Tada specification and there is no discussion in Tada of having such a non-linear lens.  Tada is a U.S. patent, and the clincher for the court was that the original Japanese priority document included different numbers that actually matched the other portions of the specification.  Finally, LG did not dispute that “the aspheric coefficients in Tada’s Table 5 were erroneous.”

Of course patent lawyers usually don’t get a balcony scene asking: O Prior Art, Prior Art, wherefore art thou Prior Art?  Rather, we take the printed publication as it is and compare the published words and figures to the patent document.  But for obviousness we do ask an additional WWPD question: What would POSITA do? And here, we have some precedent with the court announcing that a Person of Skill in the Art (POSITA) would disregard an obvious typographical in the prior art and instead fix the typo before trying to modify the reference. In re Yale, 434 F.2d 666 (C.C.P.A. 1970).

In Yale, a patentee was seeking protection for a specific compound of inhalation  the anesthetic—CF3CF2CHClBr.  The USPTO rejected Yale’s claims as obvious based upon a prior art publication that listed that same compound (CF3CF2CHClBr) as an known important analgesic compound.  At the time though the compound was not actually known and it was clear from context that the author of that prior art publication meant CF3CHClBr which was actually well known at the time. In correspondence, the author of the prior art admitted that was “of course, an error.” Still, the PTO rejected the claims as obvious since the compound was actually disclosed in the prior art.  On appeal, the CCPA reversed — holding that such an POSITA would “mentally disregard” such an “obvious error” in the prior art.

Certainly he would not be led by the typographical error to use the erroneous compound as an anesthetic even if as a chemist of ordinary skill in the art he would know how to prepare the compound. He simply would not get so far in the thought process as to determine if he knew how to make CF(3) CF(2) CHClBr, as it would have long since been discarded by him as an obvious typographical error.

In LG, the Board concluded that the Tada error was an obvious error in line with the holding of Yale. On appeal, the Federal Circuit affirmed — holding that substantial evidence supported the Board’s findings.

This is where Judge Newman dissent comes into play.  She notes that the error was not discovered “until an expert witness conducted a dozen hours of experimentation and calculation.”  Further, Tada’s owners had filed a certificate of correction to fix some aspects of the patent — but did not correct the table.  Judge Newman also notes that the only way that the expert witness firmly concluded that the error existed was by translating the Japanese priority document–something even optics experts are unlikely to do.

I agree with the panel majority that Yale establishes the correct standard to determine if an error would be obvious to a person of ordinary skill in the field. However, I do not agree with the majority’s application of this standard to the facts herein. An “obvious error” should be apparent on its face and should not require the conduct of experiments or a search for possibly conflicting information to determine whether error exists. When a reference contains an erroneous teaching, its value as prior art must be determined.

The error in the Tada reference is plainly not a “typographical or similar error,” for the error is not apparent on its face, and the correct information is not readily evident. It should not be necessary to search for a foreign document in a foreign language to determine whether there is an inconsistency in a United States patent. The foundation of the “typographical or similar” standard is that the error is readily recognized as an error. I am concerned that we are unsettling long-standing law, and thus I respectfully dissent in part.

Slip Op. (Newman, J. in dissent).  The majority disregarded Judge Newman’s arguments: “The distinction between the typographical error in Yale and the copy-and-paste error here is a distinction without a difference.”  Id. (majority opinion).

LG had asked the court to shift its standard — only disregard typographic errors that are “immediately” obvious.  The court rejected this temporal urgency as not required by Yale.