In its original panel decision, the Federal Circuit narrowly construed the Covered Business Method statute – holding that CBM review is only available when the claims themselves are directed toward a financial service.  I previously wrote:

In its decision, the court walked through the statute – noting that the focus is on the claimed invention rather than the asserted marketplace or potential uses of the invention.  Thus, the relevant question is not how the invention is used, but rather whether the claims are directed to a financial service.  According to the court, any other reading, would “give the CBM program a virtually unconstrained reach.”

The challengers then petitioned for en banc review.  That petition has now been denied – although over vigorous dissent.  (6-5 denial, with Judge Stoll not participating). As the Federal Circuit continues to be divided, it is most interesting to consider the sides that have formed:

Judge Plager also sat on the original panel, but his senior status precluded his voting on the en banc rehearing question.

For CBM Review: _Claims_ Must be Directed to Financial Service

CBM Review: Must the Claims Be Expressly Limited to Financial Services?

Once initiated, CBMs are identical to post-grant reviews (PGR) – allowing for patents to be challenged on any patentability grounds.  As implemented, this includes 101 and 112 challenges in addition to the more traditional obviousness and novelty grounds.   PGRs, however, are limited to only AIA-patents and must be filed within a 9-month window from issuance.  Those caveats have severely limited the number of PGR petitions filed thus far.   For CBMs, the AIA-patent restriction and 9-month window are both eliminated.  However, the statute creates a subject-matter limitation that restricts CBMs to only non-technological financial-services business method patents.

Another feature of the CBM program is that it is “transitional” – i.e., it sunsets in 2020 and no petitions will be accepted after that date.

Last week, I hosted a quick anonymous survey on the transitional Covered Business Method Review program — asking whether the CBM program should be allowed to sunset or somehow extended.  240 Patently-O readers responded with results shown in the chart below.  About 44% of responses favored ending of the program outright — allowing it to sunset.  About 29% favored extending the program as-is, with the narrow financial-services scope.  The remaining favored extension and expansion: 17% would expand the scope to include all information processing patents, and the remaining 10% would extend the program to include all patents.  This final option would essentially mean ending the 9-month window for PGR filing. 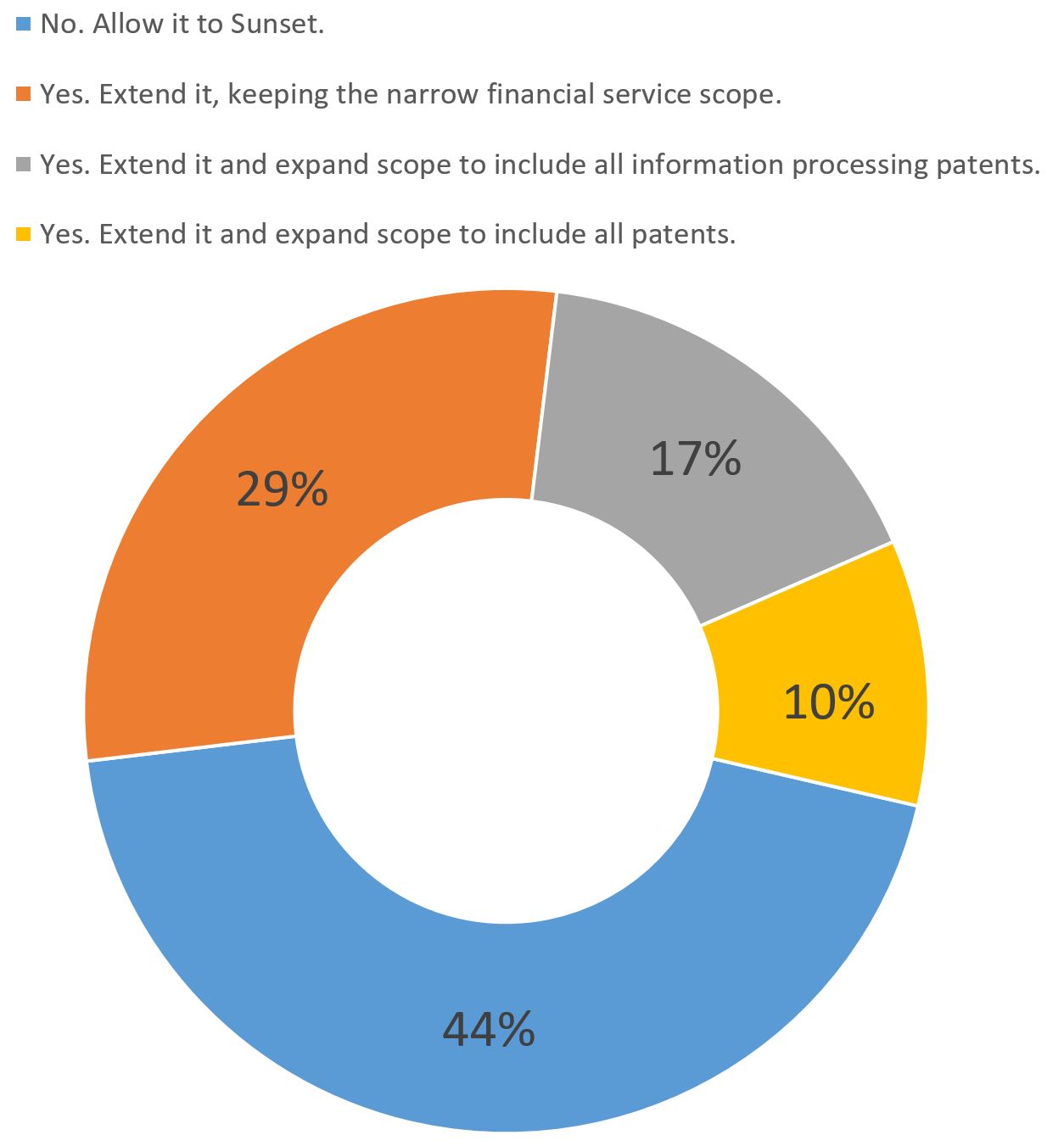 The survey also offered (but did not require) an explanation of the answer.  A variety of themes emerge from that explanation. The following are a few examples.

For patent challengers, the key response is that “it works” as a mechanism for cancelling patents, and could be extended to other technology areas.

Patents need to be strengthened, not weakened.

The PTAB process is either corrupt or incompetent.

The approach should be ended because it violates the constitutional rights of patent owners.

Of course, there are other responses as well (perhaps more below in the comments).

The bottom line here, as you might expect, is that there is not yet any consensus on whether to extend the CBM program.  My own general framework begins with the recognition that CBM does no longer adds much value post Alice/Mayo and with district court eligibility determinations being done on the pleadings.  However, I would like to see the empirical evidence.   The point of creating legislation that sunsets is that it effectively places the burden of proof on anyone wanting to continue the program.  That work has not yet been done.

The Covered Business Method Review program is a transitional program that sunsets in 2020.  These AIA trails have been extremely effective at knocking-out patents that qualify for review.   The question of the day is whether Congress should extend and possibly expand the program beyond the 2020 deadline and beyond the non-technological financial services limitations.