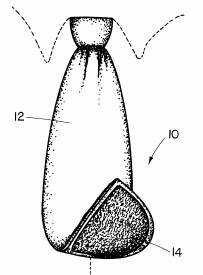 When worn, Josh Maggert’s necktie appears identical to a conventional necktie. . . . Secretly, however, the necktie has a lint-brush backing. When Josh wants to remove lint from his shirt, he simply brushes the back of the tie over the offending debris. (U.S. Patent 6,170,085).

David Johnson has written a history of the necktie. The Lemelson-MIT program provides resources for inventors. Thanks to Kevin Heller for his link to tiegate.