In a long-running dispute involving patents directed to earthquake resistant wallboard structures that permit a wallboard to slide vertically with respect to the supporting wall studs, the Federal Circuit vacated the district court’s infringement holding.

The district court barred Defendant Metal Lite from contesting infringement for three reasons. 1) Because of a prior partnership with Slip Track, Metal Lite had marked its product with the asserted patent number — thus creating a marking estoppel. 2) In an earlier decision, ("Slip Track II"), the CAFC had found the asserted patent to cover identical subject matter as another product that Metal Lite admittedly infringed — thus, Metal Lite must also infringe the asserted patent. And 3) Metal Lite’s tardy presentation of non-infringement arguments were contrary to Fed. R. Civ. Pro. R. 26 of "fully airing each parties’ theories of the case well in advance of trial."

On appeal, the CAFC vacated-in-part:

Marking Estoppel: While deliberate mismarking of a product may provide grounds for applying estoppel, there is no evidence in this case that Metal Lite believed its product to fall outside the scope of the patent’s claims when it made the decision to mark its product.  Thus, marking estoppel does not apply in this case.

NOTE: The Court explicitly refused to endorse the doctrine of marking estoppel — "We find it unnecessary to address this issue because, even assuming the doctrine remains viable, it does not apply to the facts of this case."

Identical Scope of Second Patent: Patent infringement analysis requires the court to compare construed claims to the accused product. In bypassing this step, the district court failed to consider that Metal Lite’s products do not necessarily infringe the patent.

Metal Lite’s Litigation Conduct: In its answer, Metal Lite denied infringement — and thus, was not tardy.

Accordingly, we hold that the district court abused its discretion in granting Slip Track’s motion in limine barring Metal Lite from contesting infringement.

In Dissent: Judge Newman could "not discern reversible error." 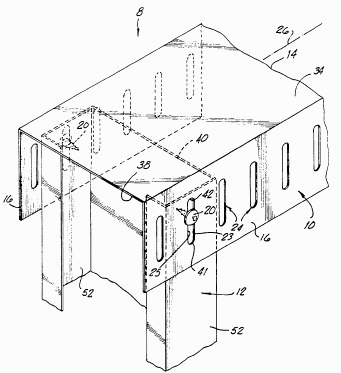