Earlier this month, the Federal Circuit ruled that Tony Colida’s patented cell phone design was not infringed by Matsushita’s GU87 phone.  (link).  Now, Colida’s parallel suit against Kyocera Wireless and Sanyo have been struck down.

A design patent is for the visual appearance of a useful article. Durling v. Spectrum Furniture Co., 101 F.3d 100, 104-05 (Fed. Cir. 1996). To infringe a design patent, the accused device must have substantially the same appearance as the patented device, and contain the points of novelty as compared with the prior art, such that the ordinary observer would believe that they are the same product.

We agree with the district court that there is no view of the facts whereby a reasonable trier of fact could find infringement, and that summary judgment of non-infringement was properly entered. 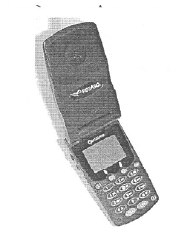 Mr. Colida [] argues that the Kyocera 2200 phones are substantially similar to the design in the ‘184 patent. The district court pointed to significant differences in the Kyocera 2200 phones, in that they do not have as pronounced a curvature, have additional buttons taller screens, and different arrays of holes in the earpiece.

The judgment of non-infringement is affirmed. 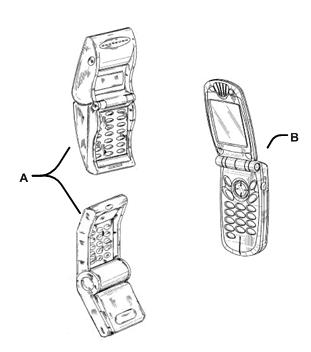 Facts: Tony Colida owns design patents covering the design of mobile phones designated A.  Matsushita owns a patent on the design for mobile phone B.  In addition Matsushita makes a GU87 phone that matches up with its patented design.  After comparing the phone with the figures from Colida’s patents, the district court dismissed Colida’s infringement suit – finding that there was no infringement as a matter of law.

Appeal: Reviewing the summary judgment de novo, the appellate panel affirmed, finding no error in the district court’s conclusion that “no reasonable trier of fact could find infringement of the [patents] by the GU87 phone in this case.”