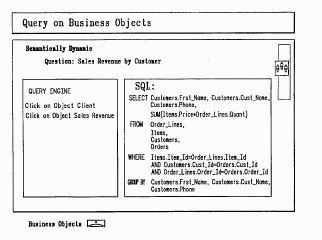 The District Court ruled that Microstrategy’s product did not infringe several of the claims, even under the doctrine of equivalents — Thus granting summary judgment of noninfringement for Microstrategy.

On appeal the Federal Circuit affirmed in-part, but reversed the lower court’s ruling that an amendment to claim 4 during prosecution narrowed the claim and thus precluded equivalents.

Claim 4 was a method claim added during prosecution and is similar to the originally filed claims.  However, the claim changed a step that involved "translating a user query to a structured query" to "generating queries in the predetermined query language."  The district court held that this amendment narrowed the scope of the function of the query engine means for purposes of patentability and raised a Festo presumption.

However, the Federal Circuit found that the new claim actually broadened the scope of the patent.  Under Festo, if the amendment is not narrowing, then prosecution history estoppel does not apply.

The case is remanded back to the Northern District of California.

[Link] Business Objects previously settled with Cognos and others in a dispute over the same patent.

Update: The plaintiff and defendant offered competing press releases on the outcome: