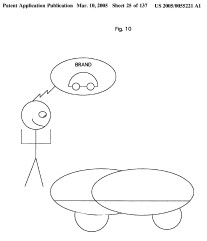 I have been planning a post about U.S. published application No. 2005–0055221 for ages, but I just could not find any words to describe my emotions.

As explained in the specification:

If you were to see a singular Marilyn Monroe walking down the street, you probably would notice.  If, however, you were to see 88 Identical Marilyn Monroes’s single filing fashionably in parade-dress parade, you would likely stop whatever you were doing and stare in exasperated amazement wondering all the while what in the world was going on. . . . By extension then, a Volkswagen beetle limousine with 88 humps, does not look the same, does not function the same, and is, in fact, not the same, as a Volkswagen beetle with 1 hump because they do not share identical Automotive DNA.

View the patent: DOWNLOAD.  The warp-drive has nothing on this one.