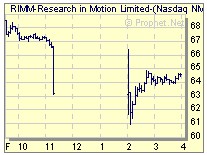 The big patent news on Friday was that RIM’s petition for a rehearing en banc at the Court of Appeals for the Federal Circuit was denied.  This news was so hot that trading of RIMM on Wall Street was halted for three hours.  (Someone on the Street does not understand odds because the denial was entirely expected.)

RIM has ninety days to file a petition for writ of certiorari with the Supreme Court and line-up any Amicus curiae.  NTP will then have thirty days to respond in opposition.  This time-line easily pushes the Court’s decision on whether to even hear the the case into 2006.  In all likelihood, the Court will decline — thus allowing the case to return to the district court to determine: (1) whether a the “term sheet” was an actual settlement; (2) whether an injunction should issue immediately; and/or (3) how new hearings/trial should proceed on the issues vacated by the August 2005 opinion [pdf]. (see UPDATE below).

In a parallel process, the patents in suit are all undergoing reexamination at the PTO.  Each patent has been initially rejected in a first office action.  However, those initial rejections have yet to be made final.

UPDATE: I received several comments on my implied conclusion that the district court would not take-on the case until after the Supreme Court came to a conclusion on the petition for cert:

Love your blog. . . . The district court gets jurisdiction back as soon as the Fed Cir mandate issues. . . . The district court can thus act even while RIM is drafting a cert petition and the Supremes are reviewing it.  In most cases, a district court will move forward because the odds of cert are so low.  The district court can, however, stay the case pending Supreme Court review.  If I were NTP, I’d be in Judge Spencer’s face right now pushing for action on this case and telling him that the revised Fed Cir opinion makes Supreme Court review highly unlikely.  If I were RIM, I’d be asking for a stay based on the progress of the re-exams, and I’d be citing the Fed Cir’s stay of the MercExchange case.