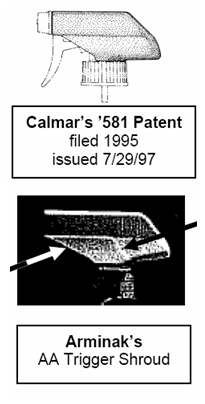 In yet another serious blow to design patent protection the Federal Circuit has affirmed a lower court ruling that Arminak’s spray nozzle design is not infringed by Calmer.

Design patent infringement is defined both in 35 U.S.C. 271 and 289.  According to Section 289, a design patent is infringed by unauthorized commercial manufacture, use, or sale of the design or a “colorable imitation.”

Whoever during the term of a patent for a design, without license of the owner, (1) applies the patented design, or any colorable imitation thereof, to any article of manufacture for the purpose of sale, or (2) sells or exposes for sale any article of manufacture to which such design or colorable imitation has been applied shall be liable to the owner to the extent of his total profit, but not less than $250, recoverable in any United States district court having jurisdiction of the parties. 35 U.S.C. 289.

Infringement: Overshadowing the statutory guidelines is the CAFC’s judicially created infringement jurisprudence. According to the CAFC, infringement requires satisfaction of two distinct tests: First, in the eyes of an “ordinary observer,” the accused design as a whole must be deceivingly similar to the patented design. Second, the accused design must appropriate one or more points-of-novelty that distinguish the design from the prior art.

Arminak manufactures and sells spray nozzles. However, Arminak does not sell on a retail level.  Rather, the nozzles are purchased by other manufacturers who join them with bottles full of product.

Sitting by designation, Judge Holderman determined that the ordinary observer should be defined by the patentee’s corporate structure. Because Arminak’s products pass through a middle-man for further processing, it cannot count the downstream retail purchasers as ordinary observers who “buy and use” the sprayer. Rather, the ordinary observer is the corporate nozzle buyer.  (Thus, eventual customer confusion regarding the final product makes no difference).

It was undisputed that a corporate buyer would not be deceived by overall similarities between the accused and patented designs — thus no infringement.

Point of Novelty: The panel also found that the accused design did not appropriate any “points of novelty” of the patented invention. In doing so, the court found that a side-by-side detailed comparison between the accused product and the patent design drawings was appropriate.

For utility patent experts, this type of analysis is second nature. However, for over 100 years prior to founding the CAFC, the rule has been that design patent infringement jurisprudence does not allow for such “side by side” examination. See Gorham Manufacturing Co. v. White, 81 U.S. 511 (1871) (rejecting a side-by-side comparison as leading to an ‘expert’ result rather than that of an ‘ordinary observer’).