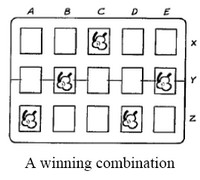 ATA and IGT have two parallel cases pending before the CAFC. This appeal focuses on whether ATA’s asserted claims are invalid as indefinite. (U.S. Pat. No. 6,093,102). The other pending case questions whether the PTO properly revived ATA’s unintentionally abandoned national stage application. (U.S. Pat. Nos. 7,056,215 and 7,108,603) [See Patently-O discussion of revival case].

This case focuses on a patent covering an electronic slot machine patent that allows players to pre-select which combination of symbol locations will be used to determine a winner.

Claims Indefinite: The district court held the claims invalid as indefinite under 35 U.S.C. § 112 ¶ 2. Its opinion focused on the claimed means-plus-function element “game control means” — finding the term indefinite because the specification did not provide “structure” to perform the claimed functions.  The specification did include the statement that the control means could be a microprocessor-based gaming machine with “appropriate programming.” However, the lower court focused on the absence of any “specific algorithm” or “step-by-step process for performing the claimed functions.”

On appeal, the CAFC affirmed, holding that computer implemented means-plus-function claims must include “more than simply a general purpose computer or microprocessor.”  The purpose of the requirement, according to Judge Bryson’s opinion, is to avoid overbroad “pure functional” claims.  Because of the ubiquity of general purpose computers, a bare microprocessor cannot be considered a sufficiently specific structural disclosure:

For a patentee to claim a means for performing a particular function and then to disclose only a general purpose computer as the structure designed to perform that function amounts to pure functional claiming.

Within PHOSITA’s Ability: The algorithm missing from ATA’s disclosure is almost certainly within the ability of an ordinary game programmer.  In fact, I believe that it would only take me (a law professor) only a few hours to create a rough algorithm showing how the ATA software program could operate.  Judge Bryson shot-down that argument: Structure for a means-plus-function element must be provided in the specification regardless of whether the structure is already well known in the art.

What is Required: “Source code” is not required to be disclosed, nor is a “highly detailed description of the algorithm.”  However, a computer oriented application using means-plus-function claims must “at least disclose the algorithm that transforms the general purpose microprocessor to a “special purpose computer programmed to perform the disclosed algorithm.” (Quoting WMS Gaming)