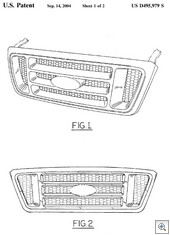 In 2007, the International Trade Commission (ITC) issued a final decision finding three Ford design patents invalid based on a prior public use. The patents relate to various parts of its F-150 truck design. Ford had asked the ITC to stop generic parts manufacturers from imports of the patented designs that were flowing in from Taiwan. In its decision, the ITC found seven of the design patents valid and infringed, but found that three of them were invalid.

Prior Public Use: The alleged prior public use in this case was an event where Ford selected 900 members of the public to attend in small groups and provide feedback on proposed car designs. At the event, security was “high,” cameras were banned as were sketches. Thus, according to Ford, the attendees could not have truly disclosed the ornamental features of the patented design. The invitees were also paid – and thus, disclosure to those individuals should be presumptively be considered private (as would normal in house discussions with an employee). Ford also argues that the payment to attendees is clear evidence that this public use was not “commercial exploitation.” 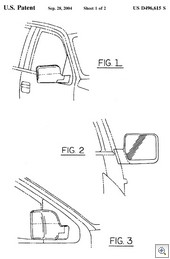 Almost no Scope: Many design patent holders run from the Federal Circuit’s 1988 in re Mann decision announcing that “design patents have almost no scope. In the auto-parts industry, however, no scope is needed so long as the patented designs are identical to the marketed products. The generic part importers are “slavishly copying” Ford’s original design — thus infringement should be open-and-shut. (See discussion below).

Ford embraced the narrow scope of its design rights – arguing that there its controls over the feedback event of preventing cameras or drawings ensures that none of the attendees will be able to place the invention in the public domain. Notably, in a recorded post-show follow-up, attendees who were asked about the design could only describe it in general terms such as “beefy.”

“The video evidence shows that the claimed ornamental features of the patents-in-suit were not in the public’s possession. Without cameras or sketches – which were specifically prohibited – there was no way here that the claimed designs could have been disclosed to the public. Ford therefore did not “remov [e] inventions from the public domain which the public justifiably comes to believe are freely available.” … In short, “beefy front end” and “a chopped top” do not describe or disclose the design inventions. 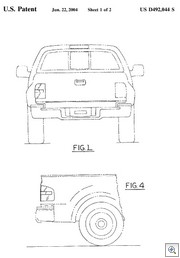 Is Point of Novelty Analysis Required?: In its counter-appeal, the Taiwanese manufacturers argue that infringement was improperly found because the ITC failed to perform the point-of-novelty test which, according to the defendants, is required even when the patented design is identically copied.

“[E]ven though the court compares two items through the eyes of the ordinary observer, it must nevertheless, to find infringement, attribute their similarity to the novelty which distinguishes the patented device from the prior art.”‘ Lawman, 437 F.3d at 1386 (quoting Litton, 728 F.2d at 1444).

The defendants are correct that Lawman and Litton appear to require the point-of-novelty test in every case of infringement. That issue will likely be resolved in the upcoming en banc decision in Egyptian Goddess. In addition, the defendants argued that the design patents should be considered obvious under KSR v. Teleflex (2007). As in that case the claims appear to be composed of a set of elements all found in the prior art.