David McGowan is a law professor at the University of San Diego School of Law. Much of his research involves the interplay between new technologies and antitrust law. I asked him to comments on the Supreme Court’s recent patent-antitrust decision: Quanta.

To the extent possible, parties and not courts should set the terms for practicing inventions.  Parties have better information than courts; they are likely to set more efficient terms.  The Supreme Court’s opinion in Quanta Computer, Inc. v. LG Electronics, Inc, does not embrace this principle, though it may not reject it very broadly. The opinion may and should be narrowly construed. 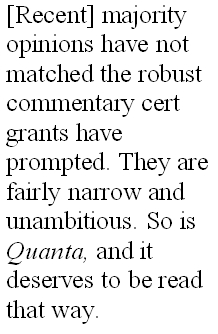 I presume readers of this blog are generally familiar with the ruling. Intel took from LG electronics a license providing Intel a defense to infringement and immunity from contributory infringement by Intel’s customers, who knew Intel’s license did not extend to them.  The Court nevertheless held the Intel license exhausted LG’s rights insofar as Intel chips were concerned.

The Court’s analysis on the main point is too formal. Because the chips embodied substantially all the relevant LG inventions and had no substantial use unrelated to practicing those inventions, the Court thought it irrelevant that Intel customers knew their chips implied no LG license.

But an invention is an intellectual achievement distinct from its embodiment in a product.   There is no logical reason the sale of a product should exhaust rights in an invention.  There is a logical objection: Forcing patentees to load up initial sales with all the terms necessary to tailor rights to potential uses will tend to increase transaction costs of initial licenses and probably result in lumpier, less tailored contracting in general.  Better to let Intel buy its peace at a price that reflects its business and let its customers do the same.

The statute does not compel the Court’s holding, which rests on history.  The Court should have limited rather than extended the cases it relied on.  These, such as Bauer and Motion Picture Patents, invoked exhaustion to defeat post-sale restrictions on use of a product.  But such restrictions may facilitate price discrimination or make sense for other business reasons.  Intel and LG, and firms like them, know better than courts when this is the case.

Against this it might be argued that a robust exhaustion doctrine economizes on downstream transaction costs.  Conceptually that is true, and perhaps persuasive at the retail consumer level, but Quanta was not such a case.  Taken to its logical conclusion, this argument implies patentees are better off suing everyone and negotiating settlements than licensing anyone and giving up the ability to tailor terms.  That implication is perverse.

The Court’s devotion to history is odd because it has not shown much regard for history of late.  In eBay v. Mercexchange it was unimpressed by the long history of presumptive injunctive relief for infringement.  In the antitrust context, in Leegin Creative Leather it recently overruled the longstanding per se prohibition on minimum resale price maintenance.  And in Illinois Tool Works the Court reversed the relatively longstanding presumption that patents imply market power in tying cases.

Quanta is at least in tension with Leegin and Tool Works.  Those cases recognize that post-sale restrictions may be efficient, a point Leegin makes directly and which is implicit in Section 271(d)(5) of the Patent Act, on which the Tool Works Court relied. In placing economic substance over transactional form, Leegin and Tool Works follow Continental TV, Inc. v. GTE Sylvania, which overruled the Court’s per se prohibition on vertical nonprice restraints.  Like exhaustion, that rule had been based on transactional formalism rather than economic analysis.

Both Leegin and Tool Works reject doctrines that trace to the same cluster of cases, such as Bauer and Motion Picture Patents, the Quanta Court cites favorably. Yet the Quanta Court said nothing to explain how its holding relates to antitrust precedents (or Section 271(d)(5)) recognizing that post-sale restrictions may be efficient.  One therefore might try to read Quanta as qualifying even its recent antitrust cases.

On this reading, at least insofar as pass-through restrictions are concerned Quanta implicitly qualifies the Federal Circuit’s Mallinckrodt precedent, which, in the misuse context, upholds patentees’ ability to impose lawful conditions on use.   Professor Ghosh has suggested (http://lawprofessors.typepad.com/antitrustprof_blog/2008/06/the-quandry-of.html) the Court’s footnote seven, which says exhaustion does not necessarily bar breach of contract claims, may point in this direction.

This reading of Quanta is neither compelled nor desirable.  It is possible to reconcile Quanta with the Court’s recent (and sensible) antitrust decisions by focusing on two things not at issue in Quanta.

First, the initial license to Intel was not conditional.  The cases the Court cited also involved unconditional sales. Quanta therefore should not be read to extend to conditional licenses, and thus not to undercut Mallinckrodt directly.  Second,  Quanta presented no question regarding pass-through conditions and should not be held to govern them.  Intel merely bought immunity from suit for contributory infringement.  The Court did not stress this fact, but it is fair to repay the woodenness of its analysis with a strict reading of its holding.

A weakness of this reading is that it renders Quanta trivial.  One wonders why the Court would take a such a case.  Possibly the Court believes patent law and the Federal Circuit have got out of hand and must be reigned in.  But its majority opinions have not matched the robust commentary cert grants have prompted.  They are fairly narrow and unambitious.  So is Quanta, and it deserves to be read that way.