The provisional rights statute 35 U.S.C. §154(d) creates the potential that a patentee may collect damages for would-be infringing activities that occurred even before the patent issued. To recover, the statute requires that the invention claimed in the published patent application be “substantially identical” to those found in the issued patent.

The language found in Section 154(d) runs parallel to that found in 35 U.S.C. §252. Section 252 allows a reissue patent to have retrospective power when 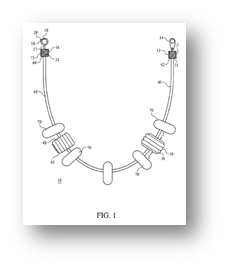 the reissued claims are “substantially identical” to those in the original patent.

The primary issue before the court was whether the patented claims were “substantially identical” to those in the published application. Like most patent applicants, Pandora had amended its claims during prosecution.

In Laitram, the CAFC also made clear that even purely narrowing amendments will violate the “substantially identical” requirement.

Pandora’s published patent application claimed a reversibly attached band. During prosecution, however, the applicant amended that element to be a “fixedly attached band.” According to the district court in its Markman hearing, this was done “in order to overcome the PTO’s rejection based on the prior art.”

Based the amendment from a reversible band to a fixed band, the court concluded that Pandora had “substantively amended the scope of the claim.” And thus, the patentee has no claim for any provisional rights. “Here, Pandora substantively altered the scope of the claim when it amended the patent to require a permanently fixed band. Because the issued patent is not substantially identical to the published patent application, Pandora has no provisional rights to assert.”