The simple explanation for that change is that the Patent Office dramatically increased its prosecution fees. Instead of charging $18 for each additional claim (over 20), applicants who filed on or after December 8, 2004 were required to pay $50 per additional claim. At the same time, independent claim fees were also more than doubled from $86 per additional independent claim to $200. The PTO also began charging a hefty fee for patent applications that were exceedingly long. All these forces came together to give applicants a clear incentive to forgo potential claim scope in favor of reducing the up-front fees. Since January 2004, the number of claims has continued to fall slightly (but significantly).

This change is good. Applicants will tend to drop red-herring and worthless claims. That in-turn will hopefully lead to tighter prosecution times and more clarity of claim scope. 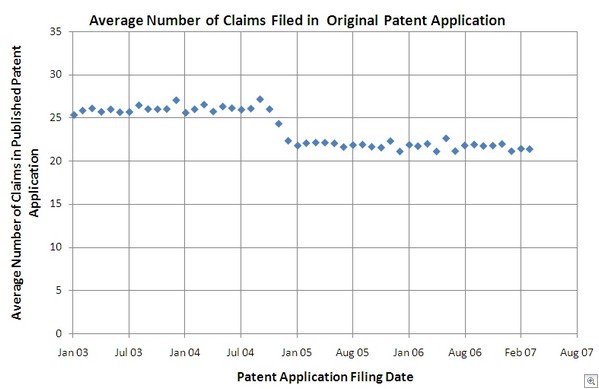 143 thoughts on “Sensitivity to USPTO Fees”