[Read Tim Wilson’s Paper] Tim Wilson (Senior IP Counsel at SAS US) has been concerned about patent quality for some time. In part, the sheer number of patent applications being filed creates a host of problems. Wilson’s solution is to raise patent fees – he says the fees should go as high as $50,000 for large corporate applicants. The result – according to natural tendencies of supply and demand – is that fewer applications will be filed and fewer patents will issue. In all likelihood, however, those that are filed will be better applications covering higher quality inventions. 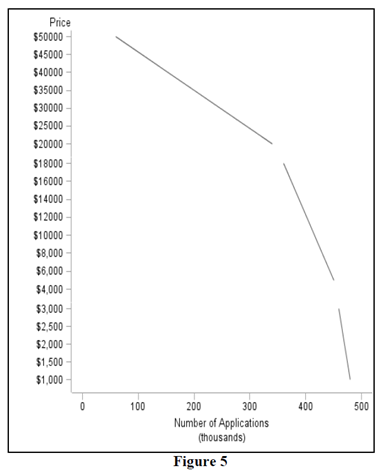 DDC Comment: Wilson’s proposal has some merit, and his work on the demand curve is especially interesting. However, the proposal suffers from three fundamental problems: First, the proposal implicitly equates economic value with technologic value – the two are related but different. Many important technical advances have only limited economic value, but still serve as building blocks for future advances. (i.e., standing on the shoulders of giants). Second, the proposal greatly favors technologies where the economic value is well known up front. Again, many important technologies are eventually found valuable – but the very high up-front price will greatly limit those applications – and consequently, the upstream incentive to innovate in that area. Third, the proposal favors firms with cash – i.e., those that have performed well in the past and have saved their money. However, many innovation experts believe that most of the breakthrough work comes from these mainstream companies. To his credit, Wilson addresses this problem by stating that the high-price only applies to large companies. However, that approach would tend to allow the “non-practicing entities” to continue to obtain patents (against one of Wilson’s primary goals). In addition, the prospect of small entities paying only $500 while large entities pay $50,000 would surely lead to other political and practical problems.

108 thoughts on “Patent Demand – A Simple Path to Patent Reform”