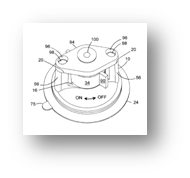 Panavise and NPI are competitors in the suction-cup market. NPI owns US Patent No. 6,666,420 and has attempted to enforce its patent via litigation against various entities, including Tomtom, Tesla, JVC, Vision Tech, and others.

Although NPI had not directed any communication toward Panavise, the manufacturer still wanted to clear any potential cloud over its products. As such, Panavise sued NPI for a declaratory judgment that the patent was invalid, unenforceable, and not infringed. The California district court, however, dismissed the case – finding no case or controversy.

On appeal, the Federal Circuit reviewed the issue de novo, but easily affirmed. Quoting its own recent decision in Prasco v. Medicis, the court noted that the “controversy must be based on a real and immediate injury or threat of future injury that is caused by the defendants.” (emphasis in original).

Here, NPI indicated that it had not “seen or evaluated” the Panavise product prior to the lawsuit and there was no evidence that the patent in any way “restrained” the activities of Panavise. “Under settled law, Panavise must present factual proof that such threat is real and immediate. Panavise failed to meet this threshold burden.”

The Court was careful to avoid additional bright-line rules (that would be proscribed by MedImmune). Thus, the opinion notes that declaratory judgment jurisdiction could exist – in certain circumstances – even when there is no direct communication between the patentee and a DJ plaintiff.